Last Thursday evening And The Winner Is blogger Scott Feinberg attended some kind of official North American premiere of Errol Morris‘ Standard Operating Procedure (4/25, Sony Pictures Classics) at Brandeis University. He posted an obviously positive reaction to the film this morning, but he also included what may be regarded in some circles as a sticky-wicket graph that gets into the fact that Morris paid the doc’s interview subjects — specifically the Abu Ghraib prison veterans who tortured and humiliated their Iraqi prisoners (and who were dumb enough to take dozens of photos of these acts). 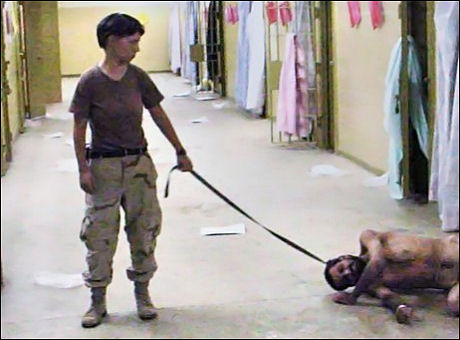 I don’t have a problem with Morris having paid money to induce these people to talk. Notebook reporters can’t pay for information — that’s completely out and always has been — but documentaries are a different matter, I feel. As long as what the subject says to the documentarian can be verified to be a portion of absolute truth and nothing but, I don’t see the problem.
Everyone who talks to a journalist or TV reporter or a documentary filmmaker about an important or hot-button subject does so because they’ve decided there’s something in it for them. This is how it works every time. For some it’s wanting to be briefly famous. For some it’s wanting to elevate their media profile — to be regarded as a player of some importance. Others talk in order to make themselves look better, smarter or less odious if the story in question is some kind of negative expose. Others talk in order to settle a score with someone else — payback — or because the interview subject feels he/she was “right” and that persons they’re speaking about were “wrong” in a reported situation, and they want people to consider their viewpoint.
The Abu Ghraib veterans probably said to themselves, “Why should I talk? I’m just going to look like a fool and a degenerate and my grandchildren and great-grandchildren are going to see this film someday and they’ll see me in this light also, so why should I talk?” And then Morris (or somebody working for him) put some cash on the table to cover this or that expense and these people thought it over and said to themselves, “Okay, now I’m getting a little something out of this so I guess I’ll talk.”
Here‘s how Feinberg relates the issue and how it was answered: “I was a bit surprised by the answer that Morris gave to one question about the interviews after the film. The questioner, a noted journalist, asked Morris how he convinced these notorious figures to agree to be interviewed for his film, and specifically if he paid them at all, ‘which is not okay in my profession.’ Morris eventually acknowledged that he did, in fact, pay his interview subjects, jokingly explaining that he did so because ‘I have a lot of money and want to share it’; he did not disclose an amount of money or if this is his standard practice.
“I, frankly, don’t really have a problem with this — it got these people to sit down and talk about their behavior, and I don’t see how it would in any way encourage them to speak anything other than the truth — except for the fact that, to the best of my knowledge, this compensation was not openly acknowledged, as it should have been since this is a documentary that purports not to have any agenda other than seeking the truth, and in my estimation does not.
“Because Morris did not do so, those who wish to disparage SOP, for whatever reason,will latch onto this as evidence of some secret agenda, just as they have done in response to his use of re-enactments in his films, including this one.”
Here’s Morris’s statement on this:
“As documentaries have become more and more mainstream entertainment, people are aware that there is money involved. The more successful documentaries become, the harder and harder it is to get people to do them for nothing.
“People [are] aware of my success and respond accordingly. I never paid people for the interviews in The Thin Blue Line, but Stephen Hawking was paid a lot of money for the rights to his book and his participation in A Brief History of Time. Fred Leuchter was paid when I asked him to appear in several scenes, e.g., the scene of him riding up and down in a van de Graff generator at the Boston Museum of Science. I did not pay him for the interview, but if he had insisted I might have done so. McNamara was not paid a fee for The Fog of War, but of course we paid his travel and hotel. Why wouldn’t we?
“The professor who asked the question at Brandeis is a print journalist. I don’t know if she has ever done a seventeen-hour interview over two days, as I did with Janis Karpinski. I didn’t pay Karpinski, but we paid for hotel, travel and per diem. It is customary in the motion picture business. To do [otherwise] would be (I believe) unconscionable. It is difficult to ask people for such an investment of time without taking care of them in some way — and that may involve paying them.
“I paid the ‘bad apples’ because they asked to be paid, and they would not have been interviewed otherwise. Without these extensive interviews, no one would ever know their stories. I can live with it.”
There’s a discrepancy in that Feinberg has reported that Morris said last Thursday that he “paid” his subjects and Morris saying he didn’t “pay” them but covered their hotel, travel and per diem. I’m sure this will be cleared up later today but even if Morris had paid them a flat fee in exchange for spilling, it would be okay in my book because (a) documentaries are different than news stories and (b) everybody wants something — it’s the way of the world. What matters is whether or not the subject passes along a portion of verifiable truth.

The cleanest summary of the Pennsylvania situation is from the MSNBC’s First Read guys (Chuck Todd, Mark Murray, Domenico Montanaro) who always deliver neat, comprehensive and super-astute summaries of everything that’s going on in the political world.

“There seem to be four possible outcomes to tonight√É¬¢√¢‚Äö¬¨√¢‚Äû¬¢s contest, and two of them will need little spin because the media won’t need the ‘help’ to interpret their meaning: 1) a double-digit Clinton victory in which she beats Obama by a greater margin than she beat him in Ohio; and 2) an outright Obama victory. But here are outcomes that will force the campaigns to go into spin overdrive: 3) a Clinton victory by less than five points, which would give Obama an opening to declare ‘victory’ of sorts and create renewed pressure on Clinton on the future of her campaign; and 4) a Clinton victory by more than five but less than 10, which is the most likely result if some of the better polls are to be believed.
“[The last scenario] would be considered a solid victory, but would it be big enough to fundamentally change the dynamics of the race? Could Clinton claim Obama was losing ground if he performed better in Pennsylvania than he did in Ohio? This is why Axelrod and his team and Wolfson and his team will earn their money today. The Clinton campaign is desperately trying to ratchet back expectations.
“Early on, Pennsylvania Gov. Ed Rendell and his folks were predicting an easy victory. Those predictions, however, are what created this expectations-game problem for Clinton today. She’s now in a position where only a blowout is going to give her the momentum she needs to make folks believe she still has a shot at the nomination.”

I’ve yet to see Reprise, but something in me rebels at the idea of seeing a “new” film that was in its prime vintage state 22 months ago, and was probably shot in ’05. Movies are the opposite of wine in that their potency and maturity are not enhanced by sitting in the bottle. I’m generally cool with a film that’s anywhere from ten to fifteen months old, but anything beyond that feels delayed. The fresher, the better.