If you want to get into shape for Vadim Perlman‘s The Life Before Her Eyes (Magnolia, 4.18 limited), you might want to read Kim Voynar‘s spoiler-free review on Cinematical. 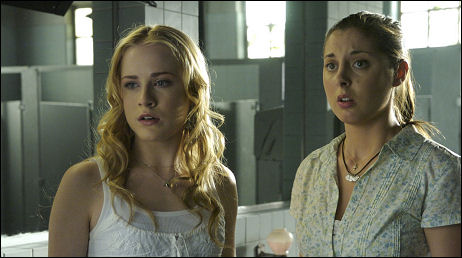 Kim is quite the admirer, especially the way it’s all put together just so and pays off in a surprising way. I’m more of a fan of the way Perlman’s film looks and feels and, despite the foreboding subject matter, soothes. Perlman has an immaculate eye; he’s very much the visual composer. It’s what I liked also about House of Sand and Fog
Everyone knows The Life Before Her Eyes is a flashback thing with two versions of the main character, whose name is Diana — the high-school-age version played by Evan Rachel Wood and the thirtysomething version played by Uma Thurman. It’s basically about their characters grappling with a Colombine-like shooting and particularly how Wood’s response to this threat affects the fate of her friend Maureen (Eva Amurri).
Two things in The Life Before Her Eyes irked me during the first 20 minutes. The first happens when Woods and Amurri hear gunshots and screaming coming from the hallways as they stand side by side in the girls’ bathroom. Obviously sounds of panic and horror, and obviously something to hide or escape from. Do they sense danger and hide in the bathroom closet, or maybe open the window and duck out? No — they stand there like bowling pins, waiting for whatever to walk through the door. This struck me as ridiculous. Every living thing can sense heavy trauma if it’s near them (steers can feel it as they approach the slaughterhouse), and not even dumb beasts would just stand there. 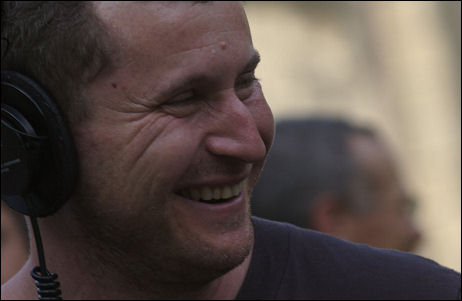 The second thing (and this is barely worth mentioning) happens when Thurman is driving by her old high school, noticing some yellow banners that have been draped over the main entranceway…and like too many people who drive cars in movies, she keeps staring to her left and not looking at where she’s driving. This kind of thing drives me insane. Movies in which actors don’t look at the road while driving deserve to die, in my view.
Perlman and I spoke late last week. He’s bright and friendly and engaging to talk to. At one point we discussed his plans to make a film of Ayn Rand‘s Atlas Shrugged in the late fall with Lionsgate and (he expects or believes) Angelina Jolie. We also talked about Russian producer Leonid Rozhetskin (Hamlet 2) and whether he’s been whacked by the Russian mob. It’s a good conversation, lasting about 24 or 25 minutes.