Incredibly, the people behind Expelled: No Intelligence Allowed, a right-wing documentary that uses Ben Stein to try and sell the idea of “intelligent design” (i.e., creationism in new clothes), are opening it in godforsaken Los Angeles on 4.18 and have hired Rogers & Cowan to flack for it and arrange for press screenings (one on Monday, 4.14 and another the following day). 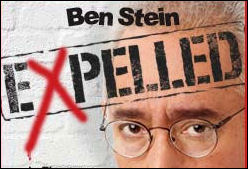 The downside is that the film’s only booking is at Mann’s Beverly Center, an old-style shoebox plex (built in 1981) where little movies go to die.
Here’s the best passage in my initial piece about this film, which was posted on 3.10.08: “The irony is that I happen to believe in intelligent design also, in a sense. There is obviously a unified flow and an absolute cosmic commonality in all living things and all aspects of the architecture. The difference is that I don’t attach a Bible-belt morality to this overwhelming fact. To me God is impartial, celestial, biological, mathematical, amoral, unemotional, miraculous and breathtaking.
“However you define the altogether, He/She/It has absolutely zero ‘interest’ in whether you or your great-uncle or next door neighbor are adhering to the Ten Commandments or having an abortion or helping a homeless person or what-have-you. The molecular perfection and mind-blowingly infinite implications of God are way, way beyond ground-level morality.”