Forgetting Sarah Marshall‘s Jason Segel “is a big guy, handsome in a slightly sappy way,” New Yorker critic David Denby observes. In a bygone age, a major New York critic calling an actor “slightly sappy” might have condemned him to supporting actor status or even obscurity, but in today’s movie-comedy world, aesthetically reconfigured by producer Judd Apatow, this may not be the case. 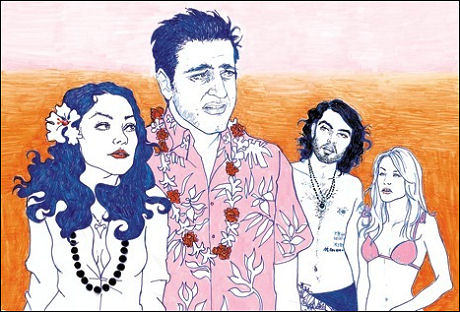 “He’s naked at the beginning of the movie, when Sarah arrives home to dump him, and naked at the very end of it. Peter is incapable of concealing anything; he has no vanity, but he’s a bit of a lazy boy, potatoing on the couch in Los Angeles when he’s not working. Segel is extremely gentle, and his puzzlement has comic possibilities, but he’s not quite an actor yet. He loses focus; his jaw goes slack, and his eyes register bewilderment.
“In Hawaii, Peter is humiliated a lot: he falls off a cliff, he can’t stand up on a surfboard, and so on. All this ineptitude is supposed to be endearing, but moviegoers want a romantic hero with some sex appeal and some strength, and Segel’s harmless routine wears us out.
“Part of the problem is that his director, Nicholas Stoller, doesn’t shape the scenes decisively. He abandons Segel and doesn’t get a clearly defined performance out of Kristen Bell (from TV’s Veronica Mars and Heroes). She’s short and blond, with a very bright smile, and she comes off as hard-edged and self-centered in some scenes and truthful in others, and we never get a bead on her. It’s not hard, it turns out, to forget Sarah Marshall. The problem is remembering her.”