I was disappointed after missing a screening of OSS 117: Cairo, Nest of Spies, a French- produced James Bond/Austin Powers spy satire, at the Seattle Film Festival in June 2006. It had opened to great reviews and strong business in France two months earlier, and it seemed like all the rage. (As far as a French- made film can be said to be the rage of anything.) A year and a half later it played at the St. Louis International Film Festival. 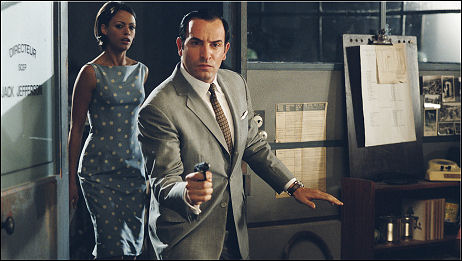 And now it’s here…almost. But too late! A little more than two weeks hence (i.e., on May 9th), it will finally open commercially in this country. I’m sitting here and I’m going, “They expect me to feel enthusiasm about an ’06 movie?” It should have at least opened last summer. The current has wound down. Flatline.