The Envelope‘s Elizabeth Snead ran a “Dish Rag” story Friday about Warner Bros./New Line’s Sex and the City apparently planning its first big premiere in London sometimes between May 13th and 16th, with the New York premiere set for May 27th. 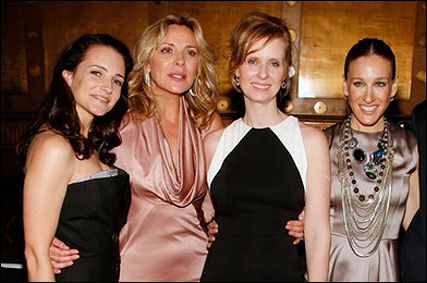 Okay, but shouldn’t Snead have at least explained why the Cannes Film Festival debut notion, which Sarah Jessica Parker said was a possibility in a Snead article that ran on 3.14, has apparently been deep-sixed? If this is the case, I’m not convinced, as Defamer‘s Stu Van Airsdale wrote last Friday, that this means SATC has been jilted or pink-slipped by Cannes.
My guess is that the Warner Bros. handlers simply decided against the Cannes option because they didn’t want to endure a DaVinci Code-like pummeling by festival correspondents and figured London would offer more of a slurpy kiss-ass reception. There’s also the possibility that the film is quite good or at least satisfying on its own terms and that the Cannes sidestep means nothing at all in terms of “uh-oh” indications. I’m only saying that Snead should have addressed this.