Iron Man (Paramount, 5.2) boasts a perfect Robert Downey performance and delivers some moderately satisfying summer-movie highs in a right-down-the- middle sort of way, but it’s been over-praised. It does a lot more clomping around than dancing or shuffling, and we’ve all had enough clomp to last a lifetime. This movie doesn’t deserve a Rotten Tomatoes rating of 94% from the regulars and an 88% from the elites. It’s more a B-plus type of thing. Which is not a put-down. 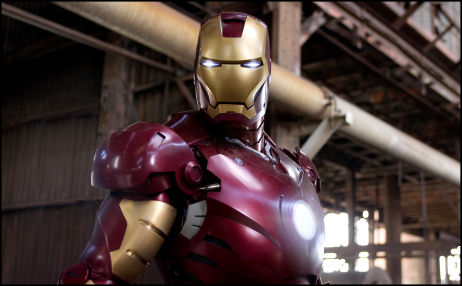 Iron Man is fine as far as it goes, but too often I felt underwhelmed. I was never twitching in agony, but the advance word had suggested it might lift me out of my chair. Forget it. I sat there with my legs crossed going “uh-huh, yeah, not bad, down with it, okay, pretty good, decent,” etc. All I’m saying is that the praisers need to take it easy. Iron Man is not some instant orgasm device. It’s okay entertainment, but it isn’t the least bit wonderful or groundbreaking or head-turning so…you know, calm down.
The two big gripes are (a) it slavishly follows the superhero-movie origin-story template, and I’m wondering why so many critics are so unbothered by this S.O.S. being trotted out again; and (b) why isn’t anyone saying anything about the jingoistic get-the-dumb-terrorists plot that John McCain or Dick Cheney will be totally delighted by if and when they see it? That’s supposed to be what….cool? We all need to climb into the Bush tank for a couple hours in order to enjoy this thing?
For my money Iron Man is a little too similar to….I was going to say Chris Nolan‘s Batman Begins, but we’ve all sat through the same formulaic superhero crap too many times.
Once again the affluent superhero-to-be has pronounced character flaws. Once more he’s oblivious to the fact that a good girl/good guy who’s been his/her friend all along is an ideal romantic match. Once again the superhero-to-be comes to an awakening, finding his alter ego and new purpose in life, by suffering a terrible trauma. Once again it takes a while for the superhero to perfect his superhero technology. Once more an older, vaguely sinister business colleague is revealed to be a villain at the end of Act Two. The superhero’s modest and self-effacing best friend stand by the superhero through thick and thin, occasionally dispensing sage advice and always coming through at some crucial moment. The superhero is nearly done in at one point — close to death — but he will rally like a champ, getting all of his strength back and then some in order to have a major face-off with the big villain at the end of Act Three. Thrillingly, lots of expensive stuff will get smashed or burned or blown to bits
It’s. The. Same. Old. Shit. Except it’s Downey as the superhero, and that means a cool-edge factor that you don’t usually get with films of this sort. I could go on and on about this but we’d all rather hang with Downey inside one of these big clanky superhero flicks than…I don’t know, a more straightforward actor. But it’s not all Downey. It’s also a bald and bearded Jeff Bridges playing a baddie, and I was bored stiff. I’ve seen and processed everything this guy has ever done and he just doesn’t have any fresh tricks left in his knapsack. Gwynneth Paltrow is more likable in this than in anything she’s been in since Shakespeare in Love. Terrence Howard is as auto-piloty here as he’s been in everything he’s made since Hustle and Flow.
Cheers to Jon Favreau for having developed his chops to the point where he can throw one of these films together and give it (by way of casting Downey or whatever) a little English and extra-ness. And for losing all that weight. But there’s no song begin sung inside this film. It’s just another big fucking lego movie with a cool guy in the lead role.
I love this David Denby description in his New Yorker review; “Downey, muttering to himself, ignores everyone else in the movie for as long as he can. Fixing his eyes, at last, on another character, he seems faintly annoyed that his privacy has been violated. Yet he delivers — to the camera, and to us. He can make offhandedness mesmerizing, even soulful; he passes through the key moments in this cloddish story as if he were ad-libbing his inner life.”
Bottom line: decent movie, great lead performance, and a realization on your way out to the parking lot that sounds like “wait a minute…I’m not sure if that was as good as I thought it was while I was watching it..why are my friends telling me this was so great?….what, are they desperate to like something?”