What a weird capitulation for the Cannes Film Festival to give the closing-night screening slot to Barry Levinson‘s What Just Happened?, which bombed big-time when it was shown at last January’s Sundance Film Festival. The offer is a gesture to the fact that the film’s story ends at the Cannes Film Festival (even though the red-carpet footage was shot at Cal State Northridge). It’s also a sop to jury president Sean Penn, who appears as the star of the film-within-the-film in the picture. 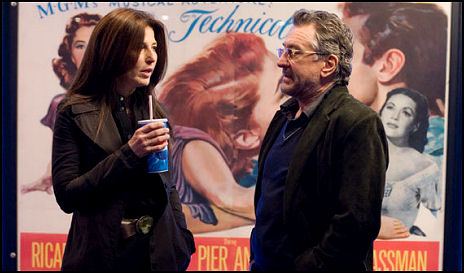 No self-respecting filmmaker wants to accept the closing-night slot, although many obviously do. It’s basically an insult honor that basically says “your film is pretty good — just not good enough to be shown in competition during the first six or seven days of the festival.” What Just Happened? has been tightened, I’ve heard, but nothing is likely to save it in terms of its U.S. distribution prospects. The Cannes screening is about selling it to European and Asian markets, of course.
Based on Art Linson‘s book of the same name, What Just Happened? is about a frazzled Hollywood producer trying to (a) get an absurdly unbalanced and immature director (Michael Wincott) to change the ending of a movie that has tested in the toilet and (b) persuade a movie star (Bruce Willis) to shave his beard before starting work on a film.