Indiewire’s Eugene Hernandez has written that buyers have told Cinetic Media that one reason they’re not interested in Tia Lessin and Carl Deal‘s Trouble The Water, a doc about the Katrina disaster that showed at Sundance ’08, is that it’s “too black.” He also quotes an unnamed distribution exec having allegedly asked, “Why aren’t more white people in the film?” 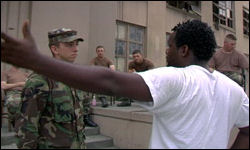 Defamer‘s Stu VanAirsdale has jumped into this one also, writing that “we’ll take a swag epidemic any day over a gang of rich assholes passing racism off as caution.”
Hold up there, Eugene and Stu. I saw Trouble The Water at Sundance myself, and I wouldn’t pick it up if you held a gun to my head and threatened to strangle my dog with your bare hands. Not because it’s “too black,” but because the blackness in the film — the look of it, the visual language, the cultural vibe and atmosphere — is too low-rent.
I’ll watch a doc at the Park City Library about people who are on the edge of destitution and struggling to hang on, but you can’t seriously expect Average Joes to pay to see this thing….c’mon. It’s one of those “lemme outta here” docs that well-meaning but sadistic film-festival programmers are sometimes attracted to.
On top of which Hernandez and VanAirsdale ignore the thing in this film that makes you want to leave immediately, which is the godawful nausea-inducing shakycam photography that occupies a good part of the opening half-hour or so. I described it thusly last January:
“I’ve almost never felt queasy from jiggly, hand-held photography (I eat films like Dancer in the Dark for breakfast), although I’ll admit that Cloverfield has more than its share. Yesterday, however, I saw the King Kong of hand-held nausea jiggle movies — Tia Lessin and Carl Deal’s Trouble The Water, a doc about the Katrina disaster.” (Since racism is part of this very p.c. discussion, I’ll say here and now that I chose the term “King Kong” instead of saying “the Citizen Kane of hand-held nausea jiggle movies” because I wanted to convey a feeling of something that’s (a) much stronger than the viewer and (b) definitely to be feared.)
“Half of it was shot by Lessin and Deal in the usual fashion and is no big challenge,” I wrote, “but the other half is shakycam footage of Katrina’s devastation shot by one of the film’s main subjects, Kimberly Rivers. (The other non-pro photographer is her husband Scott.) The footage is so scattered and whip-panny that I was starting to think about bolting less than ten minutes in.”
I was thinking as I sat there in the second row that Rivers is a complete moron in terms of the visual knack that any photographer needs to bring to shooting anything. She shoots her neighborhood/Katrina footage with an almost malicious disregard for what her audience (either a friend watching it in her living room or a congregation of 600 or 700 Sundance festivalgoers) may be experiencing down the road. Some people just don’t get it and should never, ever pick up a camera, and Rivers — God help Cinetic, Lessin and Deal — is one of them.
If I were running a New Orleans Cinematography School and Rivers tried to enroll, I would smile and put my arm around her and say, “Kimberly, I love you but you’d be throwing your money away. Your gifts lie elsewhere.”