The concerns about wind and rain delaying the flight didn’t pan out. Air France #39 is pulling away from Dulles gate #42 as we speak. We be cool. Two wailing babies in my section. Isn’t it fair to put crying babies and their parents in the luggage area below the seats? I’m speaking as a father of two boys. I’ve been there. I used to be mortified when my kids disturbed others.

A much younger Bill O’Reilly (as he looked, I’m guessing, a good 12 or 15 years ago) showing a little temper on Inside Edition. Pretty funny, I feel. Video provided by the College Humor guys.

Sunday’s post about Steven Soderbergh finishing Che at lower Manhattan’s Post Works is “wrong,” a trustworthy tech guy says. “Not sure who led you down that road. They should get their shorts yanked.
“Both films are being finished at Technicolor,” he says. “Tim Stipan of Technicolor Creative Services New York did the DI, and the DCDM for Cannes is being done at Technicolor Creative Services in London. And Technicolor Madrid is doing the filmout and video mastering.”
Post Works, he says, was merely “given some work by Technicolor” that involved “doing some Quick Time files.” How demeaning! Technicolor, he says, has been working with Soderbergh since principal photography on the Che Guevara films. The two films, he adds, are being prepped for Cannes by Technicolor.

Two of my all-time favorite movie titles are I Dismember Mama, which was used for a 1974 slasher film, and The Importance of Being Ernest, the title of a script for a Jim Varney “Ernest” film that was unfortunately not used. And I’ve always loved Out of the Past, the quietly haunting title of Jacques Tourneur‘s legendary 1947 noir with Robert Mitchum and Jane Greer. 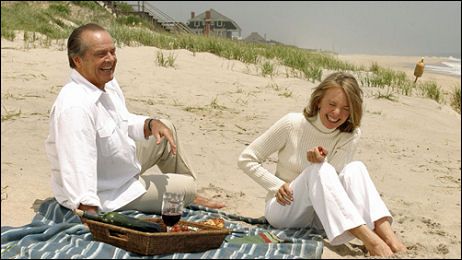 I’m also partial to Se7en, Freddie Got Fingered, Platoon and Earth Girls Are Easy because they make the movies sound like they pretty much know exactly who and what they are.
But I strongly disliked Something’s Gotta Give, the name of Nancy Meyers’ 2003 romantic comedy with Diane Keaton and Jack Nicholson, because any film using a Johnny Mercer song title, I figured, will almost certainly be “schmaltzy,” “staid,” “overly insulated,” etc. Which the movie was, of course..
Nonetheless, Josh Friedman‘s L.A. Times profile of Seth Lockhart and Jamil Barrie, the co-owners of TitleDoctors, suggests that Something’s Got to Give — a title apparently originated by the Ant Farm’s Andy Solomon — was one of the great movie-title decisions so far because the film went on to earn $267 million, and that the title “probably didn’t hurt.” Well, it did hurt with guys like me. I’m just saying.
The piece says that an alternate title that was kicked around for Will Smith‘s Hancock was Tonight He Comes. (And comes and comes.)
The worst titles of all time? The Human Stain, WUSA, To Wong Foo, Thanks for Everything, Julie Newmar, The Silver Chalice, Eegah, Ballistic: Ecks vs. Sever and Breakin’ 2: Electric Boogaloo.