Yesterday Israeli blogger Yair Raveh put up an exclusive look at the trailer for Waltz With Bashir, Israel’s Cannes entry that he calls a “unique animated war movie.” 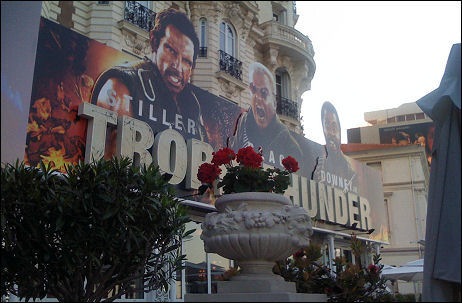 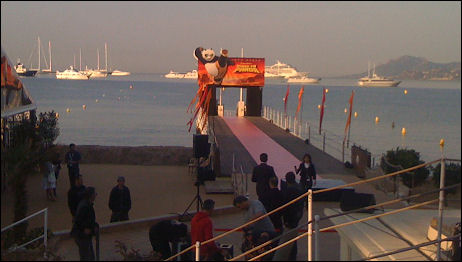 Jack Black and 40 panda bears are due to show up on the Carlton pier at 10 am to plug Kung Fu Panda, and that’s fine. I have no problem with that. I just can’t attend…sorry. 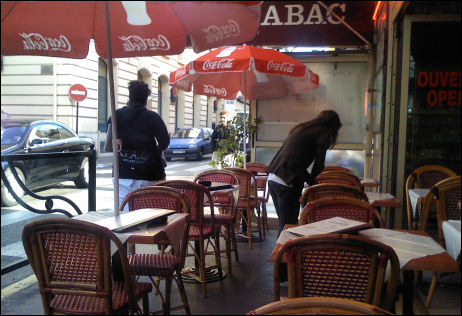 $15 U.S. dollars for a cafe au lait, bread and jam and small bottle of eau minerale. 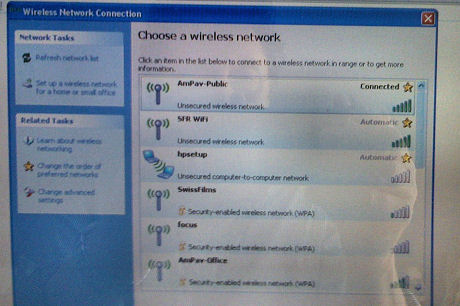 Yesterday was a great travel day — everything happened on time, no delays, etc. — until my Air France flight landed at Charles DeGaulle airport in northeast Paris at 6:15 am. Alas, my suitcase didn’t make the overnight trip across the Atlantic with me, and I didn’t find this out until it was too late to make my 8:20 am Easy Jet flight to Nice. I filled out the lost-luggage form and got on a bus for Orly Airport, where the next Easy Jet flight was leaving at 10 am. 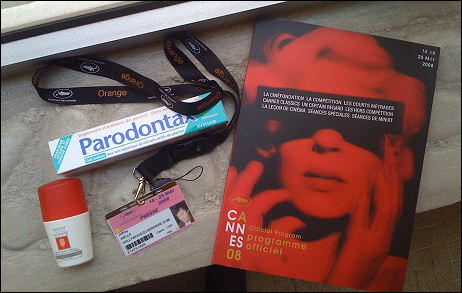 But the traffic on the peripherique (the freeway that circles Paris) was hell, and by the time we arrived two hours later the 10 am flight had left. Great. I should have just taken the train into Paris and taken a Metro down to where you get the RER in the St. Germain district and trained down to Orly. This would have taken 80 0r 90 minutes, tops.
Then I realized I’d left my beautiful little Canon camera (plus the wide-angle lens I bought in Manhattan three or four years ago) on the Air France flight from Dulles to CDG. I filled out the lost-item form, but we all know the name of that tune. The people who are hired to clean out planes after they’ve landed are scavengers. They find something valuable, they take it home and give it to their son. I’ll be taking photos with my iPhone camera until further notice.
I finally left on a Nice flight from Orly at 3 pm. I sat between a nice old French couple in the third row and slept the whole way, but we all know how it feels to be unwashed and sleep-deprived and agitated by the French. Every time I come here I’m reminded how much I hate the impossibly slow and bureaucratic French way of doing things. Especially the way they’ve got it set up so you can’t get a cab at an airport unless you follow the exact proscribed procedure. Thanks a lot, guys! Go to New York someday and see how it’s done. 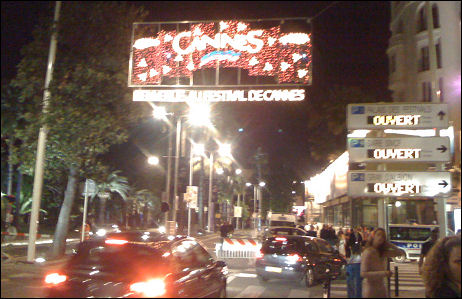 I took a bus from Nice airport to Cannes, got my pink-with-yellow-pastille pass, went to the apartment and couldn’t get in. The guy I’m renting from hadn’t read my e-mail about the expected arrival time. I got into the building, though, and left my stuff in an electrical circuit closet on the 1st etage (i.e., second floor).
I walked down to La Pizza for the usual journalist sit-down. Last night’s revellers included Cinematical‘s James Rocchi and Kim Voynar, former Premiere.com columnist Glenn Kenny, Variety‘s Anne Thompson, the Toronto Star‘s Peter Howell, and the Envelope‘s Pete Hammond.
I went to the Sofitel on the marina (free wi-fi in the lobby) to file, but I was so shagged and skanky I barely had the energy to even read e-mails, much less compose a pithy but heartfelt essay about my miserable first day in France. Got to bed around midnight, and woke up at 4:30 — couldn’t sleep. The pre-dawn hours are so peaceful in a big town. I love walking around and smelling the night air and taking pictures, etc. I went over to the Carlton (more free wi-fi) and set up shop in the lobby, and that’s where I’m writing this thing from. No coffee until 7:30 am, they say. 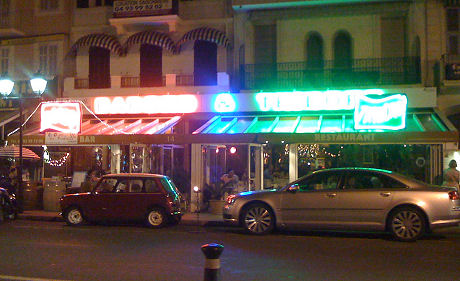 Fernando Meirelles‘ Blindness is the festival’s first film. It will screen at 10 am — two and a half hours from now. There’s some kind of Kung Fu Panda stunt happening on the Carlton pier at 10 am, but I won’t get to that due to Blindness. There’s also a blogger’s discussion thing at the American Pavillion at 4 pm. (I’m told that David Poland, who refuses to attend this festival, will be participating by video from Los Angeles.) There’s also a 7 pm showing of Ari Folman‘s animated Waltz With Bashir.
I’ve got a list of parties to go to, but we’ll see what happens. I know from experience that my only chance of eating anything nutritious is to gorge on party food.

At the not-yet-begun Cannes Film Festival “there is lots of speculation about Oscar potential for new Cannes entries from past academy nominees and winners like Fernando Meirelles, Atom Egoyan, Charlie Kaufman, Walter Salles, Steven Soderbergh, Clint Eastwood, Woody Allen and others, although the sad fact remains that since it won, no film other than Marty has gone on to win the Best Picture Oscar after also nabbing the Palme d’Or — and that was in 1955!” — from Pete Hammond‘s first Envelope column from Cannes.

While announcing that David O. Russell‘s Nailed is shooting again after last week’s SAG-mandated shutdown due to actors not being paid, Variety‘s Dave McNary and Anne Thompson are reporting that the film’s financier, Capitol Films, and its indie distributor subsidiary Thinkfilm appear to be on wobbly financial footing.
Thinkfilm “is known to owe substantial amounts to media outlets, among others,” the story says. It adds that “problems emerged Thursday when ThinkFilm execs suddenly discovered there was no money for Friday newspaper ads for Then She Found Me.”
The story says that lawyers for multi-hyphenate Alex Gibney threatened to take ThinkFilm into bankruptcy after the company failed to pay him his fees — including his Oscar bonus — after winning the Academy Award for his docu Taxi to the Dark Side.”
Sources also say “the company was going to announce an acquisition from Senator Entertainment this week but then canceled its press meetings.”
A nice way, all in all, for ThinkFilm to start to the Cannes Film Festival, no? The company’s newly promoted president Mark Urman “will be in Cannes looking at movies, going to meetings and answering a lot of questions,” the Variety story says. “But it doesn’t look like he’ll be buying.”