I’m not sure that Speed Racer was unfairly panned, per se — a lot of writers felt genuinely pained and pummeled by it — but it seemed that people didn’t give it enough respect for what the Wachowskis were at least trying to do, which was create a new kind of film language. This Darth Mojo piece is flat-out angry about the fierce critical put-downs, protesting the film’s “assassination.” 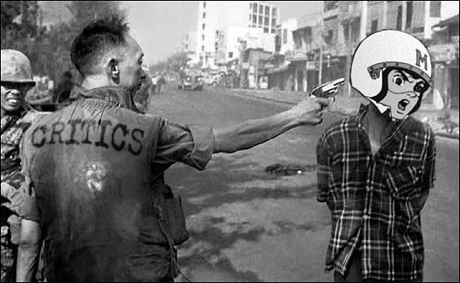 √É¬¢√¢‚Äö¬¨√Ö‚ÄúWe come to bury Speed Racer, not to praise him√É¬¢√¢‚Äö¬¨√Ç¬ù might as well have been imprinted on the foreheads of critics as they marched into their screenings of the new Wachowski flick,” it begins. “Sure enough, page after page of critical vitriol has been spewed all over this film, creating the widespread perception that Speed Racer is the must-avoid movie of the summer.
“So, it was with little-to-no enthusiasm that the Super Summer Movie Fun Club — Go! took their seats last weekend, prepared to endure the headache-inducing groan-fest that we√É¬¢√¢‚Äö¬¨√¢‚Äû¬¢ve all been warned about. When the lights came up [over] two hours later, we all blankly stared at each other for a moment and, almost in unison, began singing ‘I liked it!’
“We all liked it. Every one of us. In fact, as we walked out of the theater, we all scratched our heads and wondered where√É¬¢√¢‚Äö¬¨√¢‚Äû¬¢s this terrible movie all the critics have been bitching about?√É¬¢√¢‚Äö¬¨√Ç¬ù