I truly admire the talent and effort that goes into writing an obliging review that sounds so smart and aware that you’re not aware what’s actually going on. Seriously — it’s not easy to do this right. I can think of no one better at tapping out intelligent critiques of this sort than Variety‘s Joe Leydon. At the same time, I would be less than honest if I said I fully trust Leydon’s take on films such as What Happens in Vegas. I’m saying this with respect. 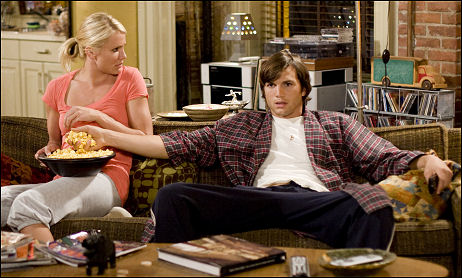 “Some trend-conscious wags won’t be able to resist describing Vegas as Judd Apatow Lite, since it’s about a self-involved slacker who becomes more directed and/or responsible as a result of his relationship with a more mature woman. But, really, that set-up already had whiskers long before Apatow became a brand name.
“In fact, the roots of this new pic can be traced back to screwball comedies of the ’30s and ’40s. The big difference — well, okay, one of several big differences — between Vegas and those fast-paced comedy classics is that Vegas actually becomes more enjoyable as it tamps down the over-the-top helter-skelter of its early scenes.”
Leydon’s use of the words “okay, one of several big differences” is the Big Giveaway. Judgment slips out! You don’t need to read any further than this. On these words hang all the law and the profit.