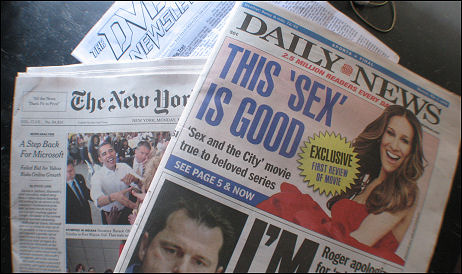 I talked this morning to a journalist who saw it here also, and if you merge his reactions with Bertram’s I’m getting the sense that it’s not too bad. Lacking the constitution of a stand-alone movie, perhaps, but enjoyable enough on its own terms.
The dividing line (no surprise) is that fans of the HBO series are liking it more than non-fans. A quick read-through of Bertram’s piece tells you he’s definitely among the former. But if you read it twice and pick it apart line by line, he really doesn’t say very much.
He concedes that the film suffers from “initial awkwardness” but this “quickly disappears” as director-writer Michael Patrick King and his leading ladies — Sara Jessica Parker‘s Carrie Bradshaw, Kim Cattrall‘s Samantha Jones, Cynthia Nixon‘s Miranda Hobbes and Kristin Davis‘s Charlotte York Goldenblatt — “hit their stiletto-shod strides.”
“The four women turn in sensitive, solid performances,” he writes, although Parker and Nixon “shine particularly bright.” Shouldn’t that be “brightly”?
The real joy of SATC: The Movie “lies in the return of all those things that mass television syndication has stripped from the series in the intervening years,” Bertram declares. “The ‘Oh, my God, they did not just do that!’ moments, the nudity, the swearing, the unabashed love of human frailty and downright wackiness. Snappy, verbal sparring punctuates the laughs and more than a few shed-a-tear moments.” 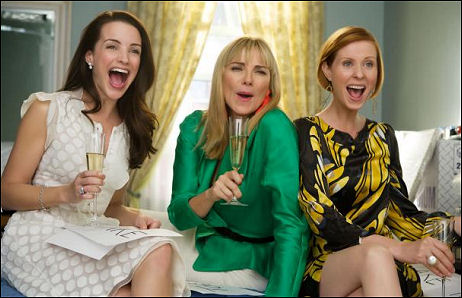 My source’s comments were put more plainly. “No one dies…that rumor about Mr. Big or someone else dying in it is bunk,” he says. The movie “is basically the same as the show. It’s like four episodes squished into one thing. It kind of works if you liked the show, but I was never a real fan of it.” Women journalists at the junket “liked it,” he allows, “and…you know, people who like the show are pretty okay with the movie.”
I asked if there was any thematic deepening or movie-ish story tension or a sense of completeness — anything that makes it feel less like a continuation of the series and more like a sturdy enterprise with its own bones. My friend hesitated. “Uhmm…I don’t know,” he finally said. “It’s very up and down. It doesn’t really resolve things [in the way that strong films do]. There’s lots of funny material. It basically undoes a lot of stuff, and then puts it all back together. Clearly they had a lot of ideas and [the film shows] they could have gone back and done another season of the show.”
What about nudity? “There’s lots of that, but not from Sara Jessica Parker. Kim Cattrall and Cynthia Nixon do most of the nudity. Nixon has a Lust Caution moment.”
Fox 411’s Roger Freidman saw the film the night before last, and says in today’s column that “it’s going to be a very, very big hit. Women wept, cheered. It’s the Neiman Marcus catalog on steroids.”
“Is it really possible to revisit the past?,” Bertram begins, paraphrasing the movie’s voice-over. “And will old friends and situations still be as dear to our hearts? Thankfully, the answer to that Carrie-esque musing when applied to the big-screen version of Sex and the City is a resounding yes.”
In short, the Sex characters and that robust top-of-the-world vibe they carry around is still warming Bertram’s heart. Great…but what does that mean for the rest of us? What could it mean? The answer is provided between the lines, but the general drift I’m getting is that the film not particularly painful for non-invested types.