What I Meant Was

Those with a semblance of smarts and education rarely have trouble getting a thought out. What they — all of us — do have trouble with from time to time are the words in passing — obiter dicta — that convey dark, underlying notions that we don’t mean to “say” but which seep through regardless. Truth-outs.
Whip-smart Hillary Clinton could have said, “My husband did not wrap up the nomination in 1992 until he won the California primary somewhere in the middle of June, right? And we all remember that the race between Bobby Kennedy and Eugene McCarthy went on until June of ’68, and that the race between Kennedy and Hubert Humphrey would have certainly continued until the August convention in Chicago.” 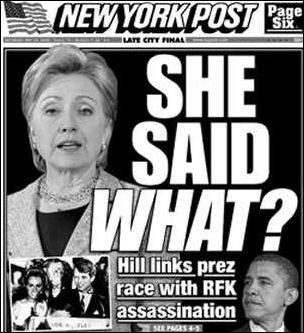 But no — she said that Bobby Kennedy was assassinated in June of that summer, and I think we all sorta kinda know what she was getting at…right? She was saying that the odds are less likely that she’ll be shot if she gets the nomination.
She’s tried every other possible rationale under the sun. We all know she implies exactly what she means to imply every damn time she opens her mouth (Barack Obama is not a Muslim “as far as I know,” etc.) Is this not how she’s been playing it all along? And now, apologies aside, she’s introduced the bullet factor into the final days of the campaign. Classy.
Here‘s N.Y. Daily News columnist Michael Goodwin on the matter.
Newsweek‘s Jonathan Alter on her general rationale for staying around, hoping for some kind of cataclysmic upset. Here’s another analysis, excerpted from Keith Olbermann‘s Countdown — “meltdown,” “something sad about it,” “things going down the drain,” etc.