For a change, I’m in complete accord with the tweedly-deedly Dave Kehr over his enthusiasm for Blake Edwards‘ What Did You Do in the War, Daddy? (1966), which is out today on DVD. 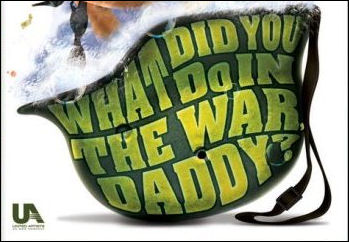 Or rather, my memory of this World War II farce, having seen it many eons ago, is in accord with what Kehr wrote today in his N.Y. Times DVD column. I remember it being hugely funny, but you have to careful with Edwards (who is one of the slickest and coarsest auteur-level directors of all time) and you really can’t trust your memory. I will therefore see it this evening and render a verdict down the road.
I remember clearly that Harry Morgan, Jr.’s Major Pott character is a hoot. He somehow gets lost in a network of caves and tunnels under the small Italian town where the story takes place, and the loneliness and confusion slowly turn him into a babbling loon. I remember one of his final lines: “White man speak with forked tongue!”

A studio exec has written and clarified some points about the Universal fire and the films (prints) that were destroyed. First, he says, “No archival material is stored at Deluxe — circulating prints of the more popular titles are kept there. Those prints, of course, remain unharmed.”
Secondly, “A monumental amount of Universal’s archival prints — highly precious, still screened on occasion, and not to be confused with original camera negatives — were destroyed in the fire.”
Thirdly, “Even though the negatives are allegedly safe in New Jersey, this is still a colossal tragedy. It will take Universal years — if not decades — to replace all the lost archival prints (assuming they even have the inclination).”
“Also remember that Universal owns pre-1950s Paramount, so much of those archival prints have been lost as well. UCLA maintains nitrate prints of those titles, but those are not lent out for screenings.”

N.Y. Times guy Michael Cieply on Sony Classics’ unusual (and perhaps trend-setting) plan to open Baghead in Austin, and then, according to SPC co-topper Tom Bernard, “probably” Dallas, Houston and maybe Portland. The New York and L.A. openings won’t happen until sometime in July or August. The first group of non-coastal cities, says Bernard, √É¬¢√¢‚Äö¬¨√Ö‚Äútend to connect with what√É¬¢√¢‚Äö¬¨√¢‚Äû¬¢s new and different.√É¬¢√¢‚Äö¬¨√Ç¬ù

The trailer for Wanted (Universal, 6.27), which certainly, definitely costars James McAvoy as well as Angelina Jolie. A bit of an odd choice to open the L.A. Film Festival…no?

North Carolina-based film archivist and HE loyalist Joe Corey tells me that he’s confirmed the validity of an e-mail, posted today by Home Theatre Forum subscriber Stephen Bowie, that “was apparently sent out in an e-mail to theaters with upcoming Universal repertory bookings, and appears to contradict what Uni [has been] telling the press,” to wit:
“It is with great sadness that I must inform you that yesterday’s [Universal Studios] fire destroyed nearly 100% of the archive prints kept here on the lot.
“Due to this we will be unable to honor any film bookings of prints that were set to ship from here. Over the next few weeks and months we will be able to try and piece together what material we do have and if any prints exist elsewhere. For the time being please check your rental confirmations and look under shipping instructions. If the print was set to ship from the studio then you date is now canceled. If the shipping instructions say ‘ship from Deluxe’ then those dates are still good.”
I haven’t heard anything definitive, but apparently this is a burned-print situation — not negatives. The archival material was at Deluxe. What was destroyed, apparently, were prints that were skedded to sent to repertory showings.

Frank Pierson‘s King of the Gypsies, which is out today on DVD, is a fairly difficult film to sit through. It’s a stab at trying to give a Godfather-like treatment to gypsy culture, and there’s just no believing it. While it “isn’t the worst film of the year,” said N.Y. Times critic Vincent Canby in his 12.20.78 review, “the gypsies should sue.” 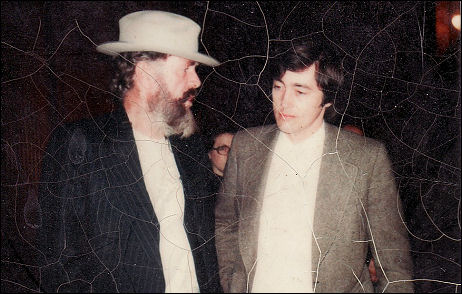 Degraded Polaroid photo of King of the Gypsies star Sterling Hayden and journalist during filming in late ’77 (or was it early ’78?) at Manhattan’s Plaza hotel.

But the film carries a special memory for me, however, as I managed an interview with star Sterling Hayden during filming in Manhattan in late ’77. Hayden, who lived in my home town of Wilton, Connecticut, and whom I knew faintly because of this, was the first “name” guy I ever sat down with for a piece.
A good actor but an even better writer, eloquent and blustery, and a “bothered” malcontent from way back, Hayden — 62 at the time — was a tall, bearded Zeus-like figure, and one of the first bohemian-minded older guys I’d had the pleasure of slightly knowing.
He liked being the ornery old rebel, and was fairly open to hanging with younger fans like myself. I visited his Wilton home two or three times to listen and learn and shoot the shit. (It helped that I knew all of his films, and had strong opinions about his best performances.) I never got high with Hayden, but I knew a couple of Wilton guys who told me they did. Hash, they said.
Hayden had some legendary problems with the bottle. He wasn’t all that different from Roger Wade, the alcoholic writer he portrayed in Robert Altman‘s The Long Goodbye. (Hayden was less bitter.) He would do rehab and fasting from time to time. I remember him saying once that fasting “is the precise opposite of debauch…the hard thing is to hold that middle ground, hold that middle ground.” 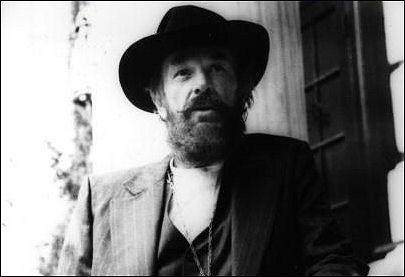 My King of the Gypsies interview with Hayden took place in a hotel room at the Plaza hotel, where filming was happening that day. It was sometime in the mid-afternoon, and I remember that he downed a couple of large glasses of Johnnie Walker Red over a two hour period. Hayden wasn’t much of a give-and-taker. He was the Great Man who’d been through it all, knew it all and had a lot to say. It was all about feeding him set-up lines and and letting nature takes its course.
He told me that producer Dino de Laurentiis had given him a copy of Lorenzo Semple, Jr.‘s script of Hurricane, in hopes that Hayden would agree to costar. When De Laurentiis asked what he thought, Hayden said (or so he told me), “I gotta tell ya — I think it’s crap!” Bristling, De Laurentiis replied, “You’re the first person who’s said that!” A day or two later Hayden talked to a De Laurentiis development guy who said, “Naahh…you’re not the first.”
The best moment of our interview happened when Hayden began speaking of his farmer role in Bernardo Bertolucci‘s 1900. He said that Bertolucci had let him write his own dialogue, and was proud of a line he’d written for his death scene. I knew it and said it before he did — “I’ve always loved the wind.” Talk about a bonding moment.

Montana is said to be safe-and-solid for Obama this evening, but indications are that South Dakota could topple for Hillary. If this turns out to be true, it would suggest, of course, that there are more white, undereducated, working- class “low-information voters” (i.e., dug-in rubes) in South Dakota than Montana.
But why, I wonder? What is it about Montana that has lessened the prevalence of “low information” voting patterns? Why are voters less racist there than in South Dakota? (Blacks represent .09% of the state’s populations; Hispancs comprise 2.1%.) It’s like there are two countries out there.
The core factor, I suspect, is that Hillary will benefit in South Dakota from the the usual under-educated older female gender-loyalty factor, which is now in an Alamo-like mindset with even her staunchest supporters realizing she’s done.

The Hollywood Reporter‘s Gregg Goldstein, known for his notepad-and-shoe- leather scoops, has written an interesting analysis piece about Charlie Kaufman‘s Synecdoche, New York. It sounds a little bit like an in-house Sidney Kimmel Entertainment memo, as it includes no reporting or even quotes.
The title of Goldstein’s piece is “Synecdoche could improve with edit”; the subhead is “Hypnotic film may undergo further cuts.” The Hollywood Elsewhere response: “No shit?”
Potential distributors eyeballing Synecdoche, New York in Cannes “were concerned about its length, especially the fragmented, inscrutable, increasingly fast-paced segments near its conclusion,” Goldstein writes. “In fact, those sequences could potentially be slotted any number of ways, replaced with cut scenes or even excised without affecting the film’s overall impact. A narrative thread doesn’t exist after a certain point in the movie, anyway.”
This is the sharpest point made in the piece. A meditative, dream-like quality does eventually overtake the film, becoming more psychological or analytical, and certainly less of a traditional-type “story.” It is, finally, what it is. And it seems on some level a little unkind to try and shoehorn a movie like Synecdoche, New York into a linear narrative form. You could, I suppose, shorten it somewhat — down from 124 minutes to 105 or 110 minutes.
“Kaufman explained that after the film was cut to three hours, there was more than one version he assembled with different scenes to whittle it to its 124-minute length,” Goldstein continues. “And despite his reputation for an uncompromising vision, he said he’d be amenable to further editing depending on which distributor picks up the film for North America.
“For despite his artistic goals, commercial dictates can’t be ignored. Producer Sidney Kimmel Entertainment (which has undergone a reorganization after recent layoffs) needs to justify the film’s budget, said to be not far above $20 million but rumored to have cost more.
Kimmel, along with fellow producers and longtime Kaufman collaborators Anthony Bregman and (originally slated director) Spike Jonze, deserve kudos for shepherding this uncompromising vision to life. But it likely will pose a unique marketing challenge, even for the pit bull tenacity of Bingham Ray, who handles marketing for SKE films.
“Any feature that dares to run more than two hours risks provoking reflexive groans from audiences and even most critics. Even if the content justifies it — as it did in spades in Paul Thomas Anderson’s 158-minute masterpiece There Will Be Blood — a film’s length has become all too important an issue among audiences with shrinking attention spans.
“In the case of Synecdoche however, less might ultimately be more since it plays like an intense and inscrutable dream. Kaufman could further distill its best scenes to evoke the experience he wants to convey, as if downloading the film from his own idiosyncratic brain. And at some point, on DVD or in an art house run down the road, he could present one of his three- or four-hour cuts, giving an even more personal view into his fascinating mind.”

24 designers, 7 store and service providers, 7 gadgets, 7 publications, 7 sips ‘n’ snacks, 5 items from the pharmacy, 4 Manhattan places and 3 ways of getting around — a list of brand names (60 in all, give or take) that appear in Sex and the City. Compiled by Vanity Fair Daily‘s Kate Ahlborn and Louisine Frelinghuysen. 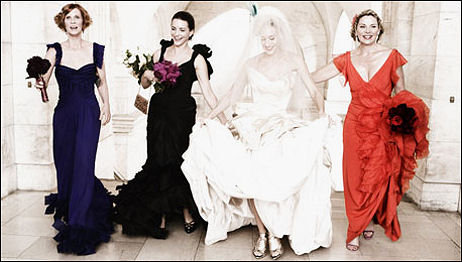 Variety‘s Peter Bart has launched a gut-punch blog-ish thing that’ll probably seem preferable to his weekly Sunday column because it’ll bring out the primal stuff. Like this complaint riff about Steven Soderbergh‘s Che having failed to dramatize the brutality of the Fidel Castro regime once it took power in early 1959.

True — the movie doesn’t do this. Soderbergh and his screenwriter, Peter Buchman, obviously weren’t interested in going there. The movie’s basic scheme (i.e., showing a successful insurgency vs. showing one that failed) wouldn’t have accommodated depictions of firing squads and other cruelties, and in fact would have been diluted by same. Hey, Peter — how come David O. Selznick didn’t show Rhett Butler dodging the Union Army sea blockades in Gone With the Wind? And where were the depictions of debauchery between Butler and at least one of Belle Whatling‘s prostitutes?