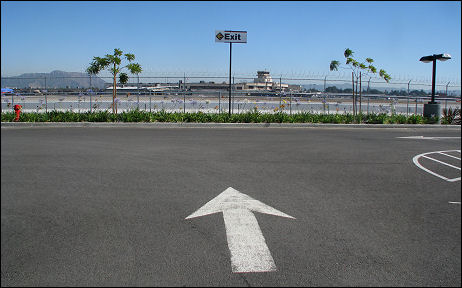 Waiting for AAA truck to drive out and meet me at the Burbank Airport’s Lot A, Section C4, to give me a jump. I Ieft my lights on when I parked last Sunday morning. It’s Lawrence of Arabia out here — a skillet, the sun’s anvil.
June 18, 2008 4:34 pmby Jeffrey Wells
50 Comments
Hulk vs. Hulk

Box Office Mojo has posted a comparison of revenues earned by Ang Lee‘s “failed” Hulk and the current incarnation. The bottom line seems to be that Universal and Marvel may have reason for concern that their new and improved Hulk is running behind Lee’s. What am I missing? 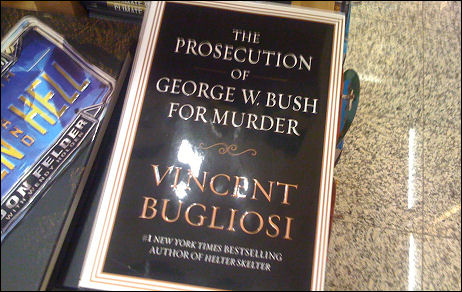 My Cinevegas visit is over, I leave for McCarran Airport three hours from now and I wish I could say I saw something here that really lifted me out of my seat. But I had an excellent time all around, and for that I owe a word of thanks to the BWR people who brought me here, and to festival director Trevor Groth and everyone else who lent a helping hand. 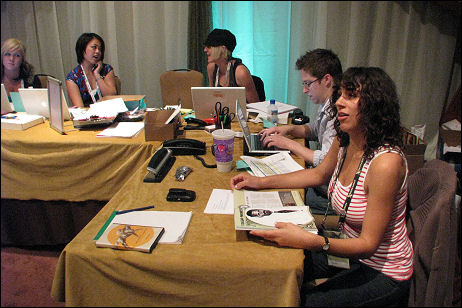 The best thing about this festival is the spirit, the hospitality and the fun. It’s the best thing to happen to Las Vegas image-wise in a long, long time. It gives the town a kind of alpha vibe (a significant thing given that Albert Brooks line about Vegas being “the worst money-grubbing place in the world”) and obviously raises the culture bar. And it’s nice to at least grapple with some of the films. The ones that don’t make you want to walk out, I mean.
I did catch two engaging docs. Scott Goldstein‘s Where I Stand, a through, well-cut, occasionally intimate assessment of two-fisted Las Vegas newspaper publisher Hank Greenspun, was the most conventional fo the two, but it’s a decent, professionally-made thing that told me the stuff I wanted to know about Greenspun in clear-cut fashon. Abel Ferrara‘s Chelsea on the Rocks, which I missed at Cannes due to leaving on the day it showed, obviously gets the lefty/bohemian/aging malcontent/economically indifferent joie de vivre of Manhattan’s Chelsea hotel. It not only understands the history and mood and spiritual attitude of its many rebel-artist inhabitants, it embodies it. It’s about as good a doc about celebrating and trying to hold on to the good old rebel days of the ’60s, ’70s and ’80s as I’ve ever seen. It made me regret that I’ve stayed at the Chelsea only one night in my entire life.
I didn’t see Jonas Cuaron‘s Ano Una, which I heard wasn’t half bad. I saw the British documentary The End but had problems with the needlessly splotchy and ragged look of it. I didn’t arrive soon enough to see Rolf Belgum‘s She Unfolds By Day, which Variety‘s Robert Koehler told me was quite respectable. A reputable critic told that me that Matthew Klinck‘s Hank and Mike, which Magnolia has picked up, was “dreadful…the worst.” I was told last year that Gael Garcia Bernal‘s Deficit wasn’t entirely successful, but the 45 minutes’ worth I caught yesterday convincned me it was at least a cut or two above mediocre. 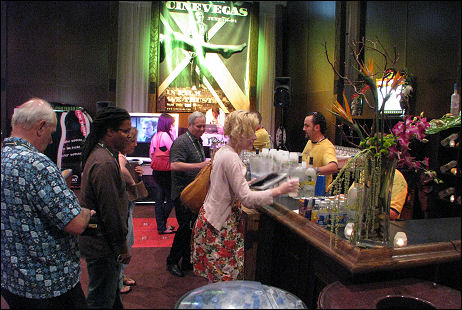 I was more or less mystified why all those bright, nicely dressed people (including Elvis Mitchell) were saying such admiring things about Takashi Murakami‘s Planting The Seeds, an anime short that played at Wynn Hotel and Casino last Monday night. Nice metaphors and all, but It played like a very sweet episode of a Saturday morning children’s TV series. Something aimed at thoughtful five year old females. I was squinting at the screen and saying to myself, “Why am I here, given the fact that my time on this planet is finite? Why am I watching this? Why did they show this? Why is Steve Wynn staring at the screen with such concentration?”
I hated, hated, hated Mike Gibisser‘s Finally, Lillian and Dan, a murky suburban love story about a couple of mousy twentysomething losers (Gretchen Akers, Jason Kean) who squeek and scamper their way into a relationship on tiny rodent feet. If I were either of these characters I would buy or steal a gun and shoot myself out of respect for the human spirit and the idea that grace and beauty are always attainable for those with reach and gumption.
I felt so sorry or these two, so sorry for the millions of people out there whose lives resemble theirs, and so sorry for myself for being stuck in a front-row seat at the Brenden Theatre plex, sitting next to Robert Koehler and feeling even worse for him, poor fellow, knowing he had no choice but to sit through the whole thing since he was reviewing for Variety. I quit after 45 minutes or so. The urge to leave began around the 20-minute mark, but I stuck it out, cock-eyed optimistic fool that I am.
Togetherness is always an improvement over being lonesome, but there are limits to being able to endure movies like this. The lethargy that comes out of this film and out of these characters has to be felt to be believed. I prayed to God as I watched it last night — an improvised prayer that went “please, God…please don’t lead to movies like this…movies that make me feel ill and gloomy and enervated by the grim lives of characters I don’t care about and certainly don’t want to know.”
I was especially infuriated with Kean’s appalling unattractiveness — his mangy man-beard, doofus haircut, doughy body, godawful clothing sense. I loathed his constant cigarette smoking, and was rooting for cancer to strike. I was thinking of that Dylan line for Desolation Row that said “her sin is her lifelessness.” Kean doesn’t sin in this context — he commits a felony. If I were a judge and asked to decide on a punishment, I’d throw the book at him. I’d send his fat lard ass to Devil’s Island so his lethargy would at least be isolated and prevented from spreading.

The Dallas Morning News‘ “Trailblazers” blog is reporting that at last weekend’s Republican state convention in Texas, a booth hosted by Republicanmarket was selling this campaign button. The seller’s phone # is 407.333.2983 (meaning they’re located somewhere in the metropolitan Orlando area) with the following e-mail: sales@republicanmarket.com. 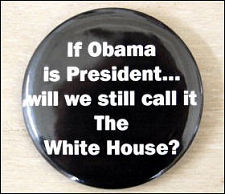 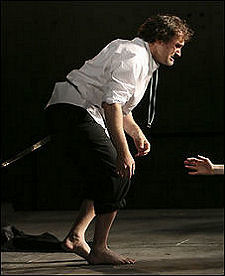 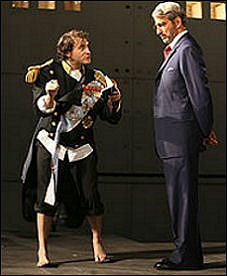 “If there’s one number that’s a predictor of mortality, it’s waist circumference,” Dr. Michael A. Newman, an internist for the late Tim Russert, has told N.Y. Times reporter Denise Grady.
It’s significant when a high-profile death from heart failure results in a restating of a basic truth that millions choose to ignore — i.e., a bulky, rotund or Jabba-sized paunch is a probable indicator of less time on the planet earth. No ifs, ands or buts.
Newman adds, however, that “most people would rather focus on their LDL cholesterol, instead of taking measures to reduce their waist size. Studies have found a waist of over 40 inches in men and 35 inches in women is a risk factor for heart disease.” Is Jabba Nation listening? Will moms and dads start to change lifestyle habits and diets of their obese children in the wake of this? Sure. For two or three weeks.
“Mr. Russert’s cholesterol was not high,” Newman tells Grady, “and medicine controlled his high blood pressure pretty well. But, he added, Mr. Russert was ‘significantly overweight..’ He also had a dangerous combination of other risk factors: high triglycerides (caused by sugar, alcohol, dairy products, red meat), a type of fat in the blood, and a low level of HDL, the ‘good cholesterol” that can help the body get rid of the bad cholesterol that can damage arteries.
“If there is any lesson in Russert’s death, his doctors said, it is a reminder that heart disease can be silent, and that people, especially those with known risk factors, should pay attention to diet, blood pressure, weight and exercise — even if they are feeling fine.
“It is not clear whether Mr. Russert’s death could have been prevented. He was doing nearly all he could to lower his risk. He took blood pressure pills and a statin drug to control his cholesterol, he worked out every day on an exercise bike, and he was trying to lose weight, his doctors said on Monday. And still it was not enough.”

“Now here‘s the bounce,” MSNBC’s First Read guys have written this morning. “A few recent national polls — which have shown Obama leading McCain by single digits after he essentially wrapped up the Democratic nomination — have led some in the media to ask: Where’s the bounce? Well, here it is. Obama is now leading in three of the biggest battleground states, according to a new Quinnipiac survey.
“In Florida, it’s Obama 47% vs. McCain 43%. In Ohio, it’s Obama’s 48% against McCain’s 42%. And in Pennsylvania, it’s Obama 52% and McCain 40%. For the McCain camp, those Pennsylvania numbers have to be particularly frustrating. And if Obama’s getting a bounce like this in Florida now, imagine what happens after a few days of bad off-shore oil drilling press in the state for McCain.”