Has anyone seen a trailer for Hancock that has significant footage of Charlize Theron? I’m told by someone who’s seen it that she has a fairly large costarring role, but the trailers are entirely (or almost entirely) about Will Smith, his super-powers, his drinking problem, going to prison, getting well, etc.

I’ve never liked that Universal globe that appears at the beginning of their films. Not the one that was around in the late ’80s to mid ’90s (with the Universal logo orbiting the earth and coming to rest in front of the camera), but the luminous funny-looking one that’s been around for…what, eight or nine years?

The oddly intense colors on the continents look like a manifestation of some disease, like electric rashes or earth lesions. The real earth is such a beautiful thing; the colors and textures so soft and yet strong with all those browns and blues and gentle greens. The Universal gang should really think about dropping what they have and devising something new. Anything but the present version.

Sputblog’s Christopher Campbell does a goof piece on 10 Actors Who Changed Ethnicity Using Facial Hair, and doesn’t mention Hugh Griffith in Ben-Hur or Alec Guiness in Lawrence of Arabia?

Entertainment Weekly‘s list of Top Ten Films of the past 25 years isn’t posted online — not yet, at least — but it’s in the issue currently on the stands, according to HE reader Dan Gaertner.

First of all, what does “top” mean? Most popular? Most influential? Most frequently rented from Netflix? If you need further proof that enlightened film culture is withering and dying on the vine, look no further. Pulp Fiction, Blue Velvet and The Silence of the Lambs, okay, but the rest…? This is worse than any list put together by the American Film Institute. The EW editors who put this list together have officially left the planet. They’re floating above us as we speak, breathing air that’s obviously lacking some basic ingredient.
Right off the top we’re going to have deep-six the Lord of the Rings trilogy, for obvious reasons. The last 25 minutes of Titanic is heart-melting and transcendent, but the problems with the rest of it should automatically exclude it from a list of this proportion. I love Toy Story is it but one of the top films of the last 25 fucking years? Neither Crimes and Misdemeanors or Husbands and Wives are as funny or heart-warming but are certainly better and more important than Hannah and Her Sisters in the Woody canon.
Saving Private Ryan is disqualified for the “cheat” fade that suggests that the old man at the Normandy cemetery is Tom Hanks on the landing craft. Die Hard is a beautifully well-oiled thriller and the best thing Joel Silver has ever produced, but again — it deserves to be on a list like this? Moulin Rouge gets the hook because the first 20 to 25 minutes of this Baz Luhrman film made my head feel as if it was going to explode.

“Like it or not, Wanted pretty much slams you to the back of your chair from the outset and scarcely lets up for the duration,” writes Variety‘s Todd McCarthy in a just-up positive review. Get the implication? “Like it or not” means that if you’re afflicted with a modicum of taste you might have a difficult time with the beefy blunt fisticuffs of director Timur Bekmambetov.

Digitally enhanced wham-bam action is akin to the digital spectacle found in The Incredible Hulk. Which, in the view of New Yorker critic David Denby, “is both too much and too little, and it’s beginning to put some of us in a funk of disappointment and boredom. When you’ve seen one half-ton piece of metal flung through the air, you’ve seen them all.” Or one utterly ridiculous car chase or idiotic spiralling-bullet sequence or whatever, working you over like slugs to the rib cage.
Wanted is one of the rankest, crudest, least artful impact-for-impact’s-sake thrillers of all time — certainly one of the least original and most vulgar I’ve ever suffered through. Alll thrust and fists and taunts, it reeks of brute grotesque Russian machismo through and through. It seems to have been made for the goons and gorillas who, some filmmakers feel, need to be gut-slammed by sound and eye-flash so they’ll pay attention or “get” anything.
All good action films have a system of logic (causes and effects and conditilons, like The Matrix had) that they adhere to — this has none at all. It has no grace or wit and style; certainly none of its own. The beginning (the bones & the set-up) is so similar to The Matrix that the Wachowski should at least be irate. 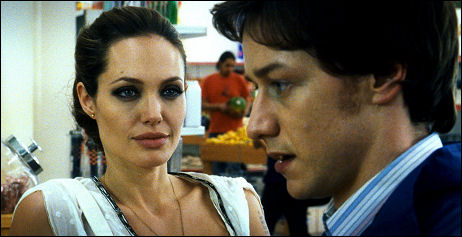 Earlier today an HE reader wrote that Wanted is “a solid piece of entertainment”? I answered by asking how, then would you rate truly first-rate action thrillers like Collateral, The Matrix and The Bourne Supremacy on this scale? You have to have some sense of proportion, some concept of good and bad…some kind of standard of measurement or nothing means anything.
For me it was pure agony to sit through — another sledge-hammer rocket slam to the castle of Good Cinema.
Plus it trots out Morgan Freeman as the wise older guy for the 14th time over the last five years. It flaunts crude CG at the drop of a hat, and uses sound as a blunt and aggressive instrument. It believes (as did the Mark Millar/J.G. Jones six-part graphic novel) that an ancient order of assassins is a good thing that promotes justice and righteousness. (In what realm is this true?)
Bekmambetov, the Russian behind the two Nightwatch movies, is another Michael Bay acolyte who believes in one rank assault after another. He isn’t fit to shine Michael Mann or Paul Greengrass‘s boots.

“Indiana Jones and the Kingdom of the Crystal Skull: The Abridged Script,” written by The Editing Room’s Rod Hilton. Not bad, but at least two weeks too late.

The Envelope‘s Mark Olsen is reporting that two rule changes have been instituted for the upcoming 81st Academy Awards. One, only two songs may be nominated from a single film henceforth. And two, the philistines on the foreign film committee who notoriously declined to vote Cristian Mingiu‘s 4 Months, 3 Weeks and 2 Days onto the short list last year have lost a large portion of their power. The new rules will allow the 20-member Foreign Language Film Award Executive Committee (i.e., friends/allies of Mark Johnson with a more sensitive point of view) to determine three of the nine films on the shortlist. The other six titles will be determined by the boobs.

The Tim Russert media wake ended yesterday with the Kennedy Center tribute, but at least one more columnist — Variety‘s Brian Lowry — has written about the overkill factor, and in so doing has joined the merry band.
“At a certain point [during the Russert tributes], even a modicum of recognition about relativity and propriety should have kicked in, as ‘Remembering Tim Russert’ essentially blotted out coverage of anything else in the world — from flooding in the Midwest to the ongoing wars in Iraq and Afghanistan.
“By doing so, MSNBC√É¬¢√¢‚Äö¬¨√¢‚Äû¬¢s maudlin repetition of platitudes finally performed a genuine disservice to the late Meet the Press host√É¬¢√¢‚Äö¬¨√¢‚Äû¬¢s memory by beginning to take on an unsavory aura of self-promotion. Inevitably in the painful process of padding out the hours, there were so many references to the ‘NBC family,’ the network√É¬¢√¢‚Äö¬¨√¢‚Äû¬¢s enduring commitment to his example, and parading by correspondents and contributors sharing personal memories to qualify as back-patting.”

It was announced yesterday that the Texas GOP party, allegedly offended by that racist campaign button about Barack Obama that was sold at a state convention last weekend and by Republicanmarket.com’s Jonathan Alcox, would donate the $1500 fee he paid to the convention to Midwestern flood victims. The followup, also reported yesterday by the AP, was a statement by Alcox that he was trying to be “funny,” having gotten the idea for the button on a political cartoon.
People who are either not very bright or in denial always say this when they reveal a dark agenda with a dark joke — “It didn’t mean anything because I was kidding…it was just a joke.” If it didn’t mean anything it wouldn’t be funny, or at least get people’s attention. Humor is always rooted in some awkward or embarassing or painful reality. It’s about reliving or revisiting these states of mind in order to lessen their residue.
Alcox told the AP’s April Castro that he had made 12 buttons “and sold four, two of them to reporters.” It was further reported that the Texas state GOP will “bar” Alcox from booth space at future events. “They’re my biggest event,” Alcox said. “It’s pretty much put me out of business.” 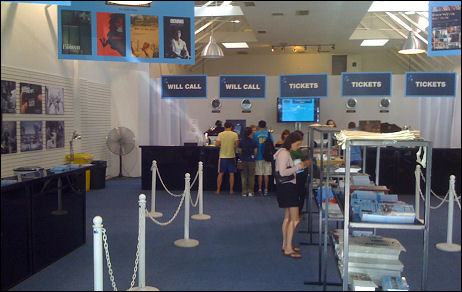 Los Angeles Film Festival nerve center on Westwood Blvd. — Wednesday, 6.18, 5:50 pm. Drove here straight yesterday from Burbank Airport to pick up my press credentials. The LAFF kicks off this evening at the Mann Village with a screening of Universal’s Wanted — an extremely crude porno-violent “entertainment” and therefore something of a curious choice for the launch of a festival that supports cinematic values and aspirations that are not evident in this selection.
June 19, 2008 9:52 amby Jeffrey Wells
22 Comments
Atlas, Perlman Split

CHUD’s Russ Fischer and Cinematical’s Kim Voynar are both reporting that Vadim Perlman won’t be directing an Atlas Shrugged feature (a deal initially reported by Variety‘s Michael Fleming in September ’07) with Angelina Jolie in the lead role — a dicey-sounding prospect to start with, given the likely length and breadth of it. 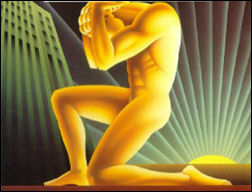 Voynar has written that she “can say with as much certainty as one can possibly have about a situation like this that the decision to step down was on Perelman’s side.”

I always include a link in every response/comment posting, but for some reason I didn’t when I ran that thing a couple of days ago about George Lucas “intending to direct” Red Tails, the WWII drama about African-merican airmen from Tuskegee. Anyway, there’s a 6.18 clarification story on Anne Thompson‘s Variety blog (also without the original link) saying that Lucas is not planning to direct, so scratch the whole thing. I read the initial missing-link story twice and did the usual searches before posting and was somehow persuaded that Lucas would be directing, but whatever. Apologies for the error.