Tapping out my Incredible Hulk feelings didn’t pan out. I’ve been saying to myself for the last six or seven hours, “I really should write this…c’mon, push it out.” It’s not a very interesting film to discuss because there’s not much going on beneath it. But it’s very efficient and it looks good and it moves right along, and as such is a much more satisfying sit than the one provided by Ang Lee five years ago. No one is going to feel burned. 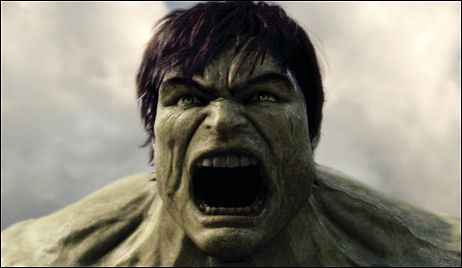 Is it as good as Iron Man? I felt the same way about both, which is that neither is worth doing back-flips over, but they’re both diverting, lean and mean, good enough, well crafted, etc.
I loved that that it’s not another origin story…thank God! The most absorbing part takes place during the first 25 minutes or so, when Bruce Banner (Ed Norton) is hiding out in Rio de Janeiro and working at a soft-drink bottling plant and living in a grubby little apartment in a huge and fascinating hillside favella. The worst part is the big Hulk vs. Hulk fight at the end…boring. Heavy-duty fights between powerful monsters are completely boring unless one of the combatants has some kind of advantage over the other. It’s like watching a battle of bad heavy-metal bands.
Norton’s Banner is first-rate — much less mopey and more than down-to-it than Eric Bana‘s. (Sorry.) Bill Hurt, the big military villain, looks freakish with a wiggy-looking wig and a stupid fake moustache. He looks like an ogre out of a Grimm Fairy Tale by way of Terry Gilliam.
Poor Tim Roth does an okay job as the Hulk’s nemesis, but his head is growing larger and larger the older he gets — he’s looking like one of those bobbing-head football dolls — plus his nose is getting bigger, his shoulders are way too narrow and he seesm to be as short as Dustin Hoffman. (He looks like a midget standing next to Hurt, and Hurt is no giant — I’ve stood next to him myself.) Liv Tyler does a solid professional job as the girlfriend. 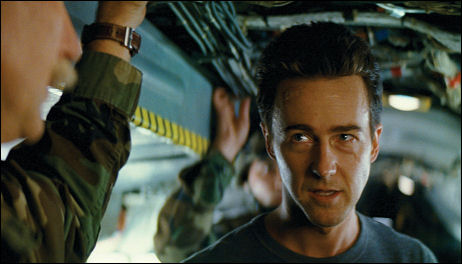