“WALL*E pushes an agenda that could, and no doubt will, be interpreted as ‘green,’ or ecologically minded,” writes Variety‘s Todd McCarthy in his just-published positive review. “It’s a theme that is certainly present, at least as pertains to what forced humanity off the planet in the first place. 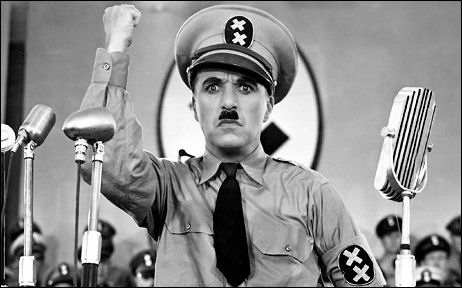 Charles Chaplin in The Great Dictator (1940)

“But in a bigger sense, the picture seems to be making a quiet pitch for taking clear-headed responsibility for the health of the planet as well as one’s body and mind. The adages about how you must lie in the bed you make, and you are what you eat — both would seem to apply here.”
Notice the respectful but emotionally arm’s length tone in McCarthy’s words? A slight but detectable tone of formality and neutrality in his acknowledgment of the film’s green (i.e., liberal, Al Gore-ian) sensibility? You can almost hear him clearing his throat as he sits up straighter in his seat and tugs on his jacket lapels. I’m sorry but I find that a little bit queer, somewhat. Each and every one of us is contributing in various ways to the ruination of our planet, and well over half of today’s American adults look and act like the immobile Tubby Tubas satirically depicted in the film, and yet a film pushing the idea of reversing the downward ecological spiral is regarded as…partisan.
Imagine the following Variety review of Charles Chaplin‘s The Great Dictator (’40), to wit: “The Great Dictator pushes an agenda that could, and no doubt will, be interpreted as ‘anti-Nazi’ or ‘anti-Hitler.’ It’s a theme that is certainly present, at least as pertains to what brought post-World War I Germany into a state of total economic ruin in the first place. But in a bigger sense, the picture seems to be making a quiet pitch against conquering neighboring countries or murdering Jews en masse. The adages about how you must shy away from German fascist doctrine by respecting other cultures and ethnicities, and that the proliferation of swatztikas can lead to catastrophic events — both would seem to apply here.”