Clint at the Aero

Clint Eastwood did a little drop-by last night in front of a packed house at Santa Monica’s Aero theatre. The visit followed a screening of Michael Henry Wilson‘s Clint Eastwood: A Life in Film, a tribute doc about aspects of Eastwood’s life and career. 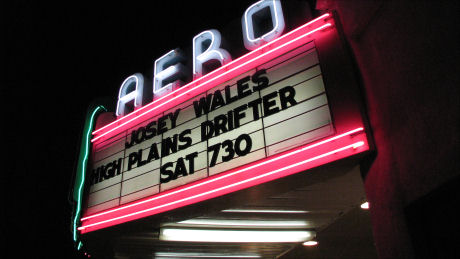 Wilson’s film has exactly one talking head — Eastwood. The descriptive terms are “intimate,” “straight,” “unfettered” and “revealing.” The other Eastwood doc, Bruce Ricker and Dave Kehr‘s Clint Eastwood: Out of the Shadows, is more comprehensive, but Wilson’s doc, being less of a show and less slick, gives you a quieter, gentler appreciation of the man within.
Clint was his usual low-key, reflective, straight-dopey self during the discussion. He shared the small stage with Wlson and L.A. Weekly critic Scott Foundas, who moderated. Foundas’s questions were intelligent but a little too inside-baseball. Ditto the audience questions, which were also a little suck-uppy. Nobody asked about the Spike Lee brouhaha. Nobody asked about Gran Torino. Nobody asked whether Clint likes McCain or Obama. (The former, I’m guessing.)
When I arrived around 7:15 pm and given my ticket, I was told that the Aero management didn’t want me to ask “any journalist questions.” What’s that supposed to mean? I asked. I’m supposed to…what, ask only fanboy kiss-ass questions? It turned out to be a moot discussion because Foundas never picked me. I was sitting about halfway back on the left side.
There was also a rule about no photos, which I respected.