Hillary Clinton‘s opening line at the podium today — “this isn’t exactly the party I’d planned, but I sure like the company” — was spoken with real feeling. Ditto her comments about the symbolic historical role her campaign played over the last several months. But to me, the delivery of the most of her speech felt a little tight and clenched. She wore a reserved and somber expression throughout, and yet it seemed like a fairly sincere statement. Wisely written, well sculpted. She stood up. 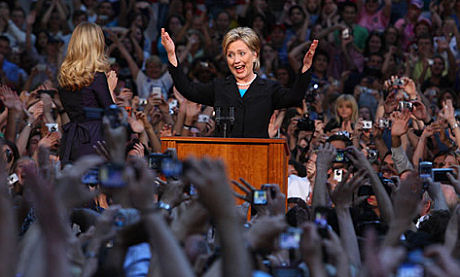 Hillary got into the soul of it towards the end — I’ll give her that. During the final seven or eight minutes she almost begged her older-women supporters not to turn away from Obama….”please don’t go there.”
“I endorse [Barack Obama] and throw my full support behind him!,” she said about six or seven minutes in. Some in the crowd are very clearly and audibly yelling, “Noo!! Booo!!” “Support him as you would me!,” she said. Nooo…!!! “I am standing with Senator Obama as I say, ‘Yes, we can!'”
Her expression is nonetheless correct, guarded — on the glum side. That look of indigestion on her face after every “support Obama” statement was pretty evident. “I understand that we all know this has been a tough fight, but the Democratic party is a family” and now it’s time to pull together, etc. Yeah, yeah, some in the crowd seemed to say.
To those who might refuse to support Obama or even vote for John McCain, “Please don’t go there,” she pleaded. “The stakes are too high to dwell on what might have been. I will work my heart out to make sure that Senator Obama will be our next president, and I hope that you will join me in that effort.
“It would break my heart that in falling short of my goal, I would in any way discourage any of you in pursuing your own goals. We weren’t able to shatter this particular glass ceiling, but it’s got about 18 million cracks in it. If we can launch 50 women into outer space, we can someday launch a woman into the White House.
“Will we go forward together or stall and slip backwards? Like millions of women, I know there are still barriers and biases out there. I ran as a daughter who benefitted from opportunities my mother never dreamed of. There are no acceptable limits or prejudices in the 21st Century. You can be so proud that from now on, it will be unremarkable for a woman be in a close race for president…truly remarkable, my friends!
She was being careful, forceful. She sold the message, but was, I felt, reading the words more than feeling them. The body english, the facial muscles and the heart were only somewhat there. The woman is in pain, but she did the right thing.