Clint Eastwood‘s Changeling, a 1920s kidnapping melodrama starring Angelina Jolie and John Malkovich, was going to open on November 7th. Now Universal is announcing a new date that’s two weeks earlier. The limited release will be on Friday, 10.24, and the wide on Friday, 10.31. 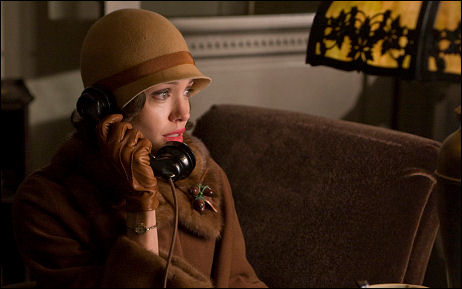 There’s no ambiguity about the title, by the way, as was indicated during the Cannes Film Festival. Eastwood’s films will definitely be called Changeling, despite that festival rumble about a possible switch to The Exchange and producer Brian Grazer having told Variety‘s Anne Thompson during the festival that he “thinks” it’ll be called that.
My reaction after catching the Cannes makeup screening: “Longish and leisurely paced. Delivers a keen sense of humanity and moral clarity. Offers a complex but rewarding story. Really nice music, as usual, that lends a feeling of warmth and assurance. Superbly acted, shot, and paced (not every movie has to feel like a machine gun).
“More than a few top-notch performances — Jolie’s leading the pack. A movie that understands itself and its subject matter completely. Some overly black or white-ish characterizations, but not to the extent that they bug you horribly. Aimed at adults (i.e., those 25 and over with the ability/willingness to process this sort of thing). Not a great film, but a very fine one. Terrible last line, though.”