Last night’s AFI Warren Beatty tribute at the Kodak theatre, which lasted three and a half hours, was an exceptional evening even by the emotionally gushy standards of such affairs. Or so says Pete Hammond, who’s been to several of these shebangs over the years. A fantastic list of A-level talent and heavy-hitters, and much eloquence and with and warmth. 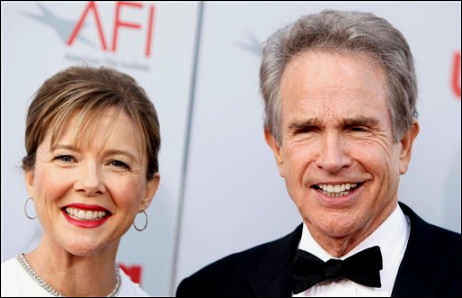 Here are some random notes which I’m not going to even try to shape into an article. This is just one recollection, and I’m not going to call over town to verify every last detail but most of this is probably on the money.
“Taped tributes from Barbra Streisand, Gene Hackman, Mike Nichols, James Toback, Goldie Hawn, Julie Christie and John McCain were played. There were specially shot clips of Beatty talking about his career that ran all through the show.
“The old legendary girlfriends from way back weren’t there, live or on tape — no Leslie Caron, no Michelle Phillips (or at least, I didn’t see her), no Britt Eklund, no Joan Collins. Poor Natalie Wood is dead, of course.
Nobody mentioned or even privately discussed Peter Biskind‘s long-gestating book about Beatty, Hammond said, so I called Biskind to see how things are going. Fine, he said. He’s finished Part Two, which starts with the making of Shampoo and obviously moves on to the present. Part One — early life, starting out, early career — is tougher because so many people who were around are dead. But the plan is to have it out by the fall of 2009.
“Al Pacino, Jane Fonda, Jack Nicholson, Dustin Hoffman, Diane Keaton, Quentin Tarantino, Robert Towne (who once showed me a “fat farm” version of a script he wrote for Beatty’s Love Affair that was much better than the version that was ultimately shot) and Halle Berry delivered live remarks,” Hammond reports.
“The show opened with Earl Scruggs and some bluegrass banjo players, in tribute to Bonnie and Clyde. The first person on, I think, was Jane Fonda. She never made a film with Beatty but said that Warren and she “did a screen test together for a Joshua Logan film that was never made.” Nicholson showed up in shades a long black coat, looking a little tattered. Pacino presented the actual award to Beatty. Keaton said that of all her screen moments, she was proudest of the “don’t leave me” train station scene from Reds.
“George McGovern was there, Bill Clinton was there, Gary Hart was there. it was kind of a McGovern campaign revival. Warren Christopher, Jerry Brown. Clinton came on, looked great and gave this amazing speech, mentioning Bulworth as an important film to him. USA Today’s Anthony Breznican and Variety‘s Anne Thompson were there.
“Near the honoree’s table, Beatty hugged sister Shirley MacLaine for the longest time…they just stood there and hugged and didn’t let go.
“Somebody — it may been Don Cheadle — somebody came out and said that as directors, Clint Eastwood and Warren Beatty are together typically require 140 takes per scene — Eastwood does one and Warren does 139.
Tarantino, whom Beatty blew off as far as playing the lead role in Kill Bill was concerned, “said W.B. represents the kind of thing that Hollywood isn’t any more,” says Hammond. Dustin Hoffman went on forever. Michael J. Pollard came up and said something colorful and incoherent, which was kind of cool.
The gift bag “was a collection of Beatty movies on DVD” and one of those video table frames that runs a slide show of different shots.
There was one clip shown from The Fortune. Lee Grant, who at one time was apparently working on a documentary portrait of Beatty, was not there. Ishtar director-writer Elaine May, says Hammond, was there also.
Nobody mentioned Barack Obama the entire night. What…out of deference to Beatty’s friendship with John McCain?
Beatty thanked the film industry for leading him to wife Annette Bening, “who has given me the most important thing of all, which is her love.” He said he was “particularly humbled by the presence” of McGovern, Hart, Brown and Clinton, and at one point described himself as “an old-time, unrepentant, unreconstructed, tax-and-spend, bleeding-heart, die-hard liberal, liberal, liberal Democrat.”
The event was a drinks-and-dinner deal that involved unscrewing and removing most of the seats in the orchestra to make room for tables. A much abridged version of the Beatty tribute — what, 90 minutes’ worth? — will air 6.25 on the USA Network at 9 pm.