“I just returned from a Dark Knight screening” — the one for junketeers they had last night at the Bridge — “and I wanted to commit this to a public forum as quickly as possible,” KTLA’s Sam Rubin wrote last night at 10:27 pm. “Heath Ledger‘s Joker is a blockbuster performance, and he will absolutely be nominated for an Oscar. And at this point in the year, Ledger is also a hands-down favorite to win it posthumously. 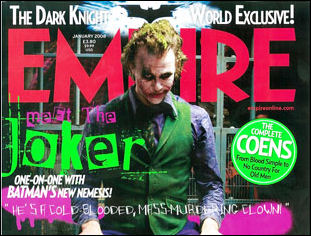 “Ledger offers perfect pitch, perfect tone…hits all the right notes. The Dark Knight is among the better super-hero movies of all time, and Ledger is the best villain in a super-hero movie of all time. Really. It will only add to the conversation [about] all that Ledger could have accomplished had he lived. Amazing work.”
If you’re going to give Ledger the Oscar at this stage — which is fine if Rubin really believes it to be a fact waiting to happen — aren’t you obliged to use adjectives that are a little more intriguing than “perfect” and “right”? Shouldn’t you try to describe the highs and contours of the performance, at least a little bit?
If I’d been there I would be posting at least two or three descriptive graphs of my reaction to Ledger’s performance. If I’d been invited, I mean. I’ve been hot to see this for months and months, like everyone else. But Warner Bros. publicity shut the door last September or October over very little — a certain party had a hissy fit — and a certain Manhattan-based distrib exec, in a show of manly resolve, refuses to reply to make-nice e-mails. 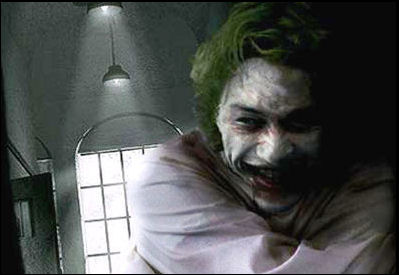