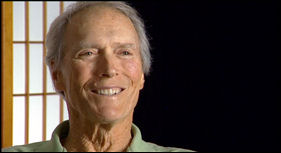 The Aero interview will follow a 7:30 showing and before a subsequent screening of Don Siegel‘s The Beguiled (’71), a Civil War-era drama with Eastwood, Elizabeth Hartman and Geraldine Page.
Oddly, Wilson’s film is not included in the just-released Dirty Harry box set. As this Amazon listing states, the DVD doc is Bruce Ricker and Dave Kehr‘s Clint Eastwood: Out of the Shadows, a doc released nearly eight years ago.
Warner Home Video didn’t respond to queries, so I asked an Eastwood assistant at Malpaso Prods. if the box-set doc is the Ricker-Kehr and not the Wilson, and she said yes.
Here’s a piece I wrote nearly eight years ago about the Ricker-Kehr doc, called “Through A Glass Mildly“:
“I caught a showing Monday evening of Clint Eastwood: Out of the Shadows, a 90-minute documentary about the actor/director’s celebrated career. It will show on PBS on Wednesday, 9/27, as part of the “American Masters” series. I was invited by the doc’s writer, Dave Kehr, the well-known film critic who’s reviewing these days for CitySearch, an online site, and who is also a regular contributor about film for the New York Times.
“Directed by Bruce Ricker, Shadows is a first-rate job. It points out every important or noteworthy step in Eastwood’s evolution from bit-player actor (under contract to Universal in the ’50s) to TV actor to tough-guy icon to Oscar-winning director for Unforgiven, his one unmistakable masterpiece. Kehr weaves together every knowledgeable point anyone could make about Eastwood’s oeuvre. The influences and growth experiences along the way are fully noted and reflected upon.
“But there’s no dodging the observation it’s also a bit of a gloss. I wasn’t looking for a tear-down job, exactly, but docs with a warts-and-all approach to their subjects always seem to have more resonance. It may be that Eastwood has lived a relatively wart-free life (he’s obviously not the ‘bothered’ type), but it was also clear to me that the filmmakers weren’t very interested in digging too deeply into this area.
“What major artist hasn’t grappled with demons, or been driven by some festering inner fear, or plagued by some behavioral shortcoming? Eastwood, apparently. He emerges here as a determined but mild-mannered artist who developed his brushstrokes skillfully but slowly, and who dabbled with second-rate material too often and never really went for broke except with Unforgiven.
“I’ve long admired Eastwood. I especially liked the way he made The Bridges of Madison County into a much better and more touching film than the book. But his directing style has sometimes felt too casual to me, and he’s frequently been too accommodating in his choice of material. The doc acknowledges he may have made one or two too many Dirty Harry films, but it never really takes him to task for directing swill like Firefox and The Rookie. Nor does it ask why A Perfect World and Midnight in the Garden of Good and Evil played so flat.
“On the other hand, it doesn’t even mention a film of his I haven’t seen in years but which I remember as being not half bad — Breezy, the 1973 May-December romance with William Holden and Kay Lenz — which Eastwood directed but didn’t star in.
“Narrated by Unforgiven co-star Morgan Freeman, the doc benefits from interviews with Eastwood, director Curtis Hanson, Eastwood biographer Richard Schickel, Unforgiven co-star Gene Hackman, Bird star Forrest Whitaker, Eastwood’s mom, and many others. I especially enjoyed the black-and-white clips from Eastwood’s bit parts in ’50s sci-fi movies and from the TV series Rawhide, which he stayed with for seven years as surly cowhand Rowdy Yates.
“Out of the Shadows plays like a very smart, gently perceptive valentine. No harm in this. It’s a good piece. I was just hoping for more.”