It’s nighttime in Afghanistan now, and the temperature in Kabul is 81 degrees (according to the iPhone weather thing). I’m imagining sitting on an outdoor terrace in eastern Afghanistan, sipping from a warm can of Coke and hearing very faint sounds of rifle fire coming from somewhere beyond the hills, as well as local men talking in a nearby cafe…walla walla, mullah mullah. 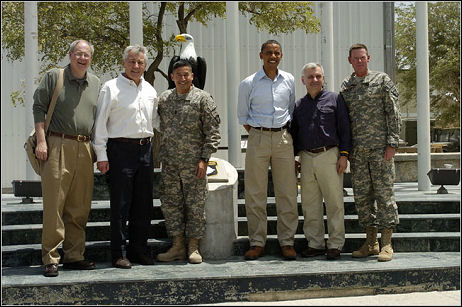 “Im more interested in listening than doing a lot of talking,” BHO told reporters before leaving the States for his MIddle Eastern/European visit. “And I think it is very important to recognize that I’m going over there as a U.S. senator. We have one president at a time.”