By The Swimmin’ Hole

“When The Last Picture Show came out, in 1971, it was acclaimed not only as the breakout hit of a young gun (the director, Peter Bogdanovich, was still in his early thirties) but also as a dusty remembrance of things past,” writes New Yorker critic Anthony Lane. 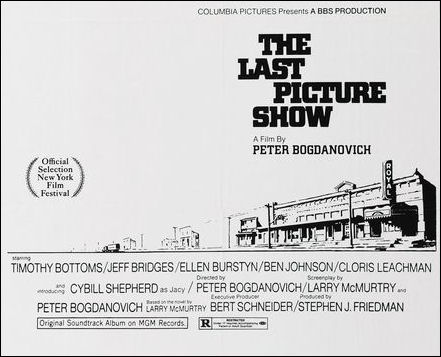 “The movie was set twenty years before, in a small Texas town, where even the young folk — played to perfection by Jeff Bridges, Cybill Shepherd, Timothy Bottoms and others — bore the look of natural-born elegists, and where the quest for sexual services (led by Cloris Leachman, as the wife of a sports coach) seemed less a matter of lust, let alone joy, than a desperate bid to delay the dying falls of love.
“Nowadays, we are the nostalgists, and it is Bogdanovich’s film (which the director David Gordon Green selected for a July 20 screening at BAM) that asks to be treasured as the product — indeed, the standard-bearer — of a faded age. There was a time when movies themselves felt like small towns: rooted fast in their environments, and alive to the wistful chatter of minor characters as they crossed paths and then went on their way.”
And the most small-towny moment in the entire film was Ben Johnson‘s soliloquy about change and “gettin’ old” and a love affair he had about 20 years back with a girl, and a silver dollar she probably still has.

“You wouldn’t believe how this country’s changed. First time I seen it there wasn’t a mesquite tree on it. First time I watered a horse at this tank was more than 40 years ago. I’m probably just as sentimental as the next fella when it comes to old times.”