Can We Have A Taste?

Why does this review of Stanley Kubrick’s Boxes, the recently-aired, British-produced doc about the legendary filmmaker’s pack-rat belongings, by thelondonpaper‘s Stuart McGurk makes no mention of the allegedly terrific behind-the-scenes footage of Kubrick working on Full Metal Jacket? 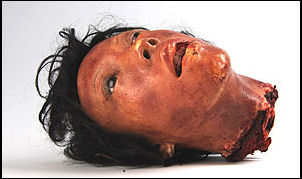 Prosthetic head of the female Vietcong sniper killed at the end of Full Metal Jacket. Kubrick allegedly shot (but of course didn’t use) footage of Adam Baldwin’s “Animal Mother” slicing it off with a machete after her death in the burned-out building.

Joncro, an HE poster from London, saw the show and posted on 7.15 at 3:34 pm that the FMS footage is “fascinating” and “hilarious, with Kubrick arguing with the English crew about how many tea breaks they are having.” He also mentioned a Lolita screen test.
Asking it before, asking again: when will this doc show in the States, when will it be marketed on a DVD, how can it be viewed online, etc.? And what about the other documentary called Citizen Kubrick, which has also been shown/screened in London? If Warner Home Video has first dibs, a voice is telling me we won’t see these docs for a long time.
Stanley Kubrick’s Boxes is a record of journalist Jon Ronson “[trawling] through the thousand-plus boxes of personal paraphernalia Kubrick left after his death in 1999.” 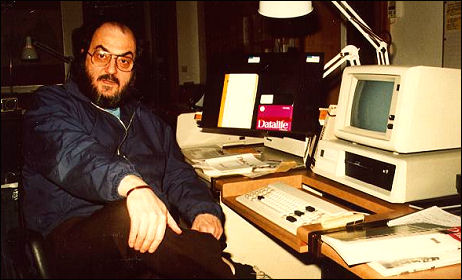 In this 1984 shot, Kubrick poses with a just-purchased, brand-new, hot-off-the-factory-line, state-of-the-art IBM computer.

Another guy named Bernd Eichhorn‘s also sifted through the Stanley Kubrick Estate, going through close to 1000 boxes, searched cellars and attics, collected memorabilia, photographs, objects, scripts, books and paperwork.
The contents of 977 boxes are now the basis of the Stanley Kubrick Archive, which is housed at the University of the Arts London. 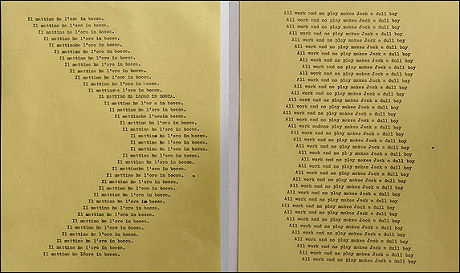 Italian and English-language versions of Jack Torrance’s demented writings in The Shining — Kubrick reportedly had versions shot in every major language.