“Given that Heath Ledger‘s Joker performance is worthy of a nod, but hobbled by its generic provenance, what’s the extra magic ingredient that will put Ledger over the top come next February?,” asks the Guardian‘s John Patterson. “Will it be the stark and depressing fact that he’s dead, and thus worthy of posthumous veneration. Or will it have more to do with The Ugly? 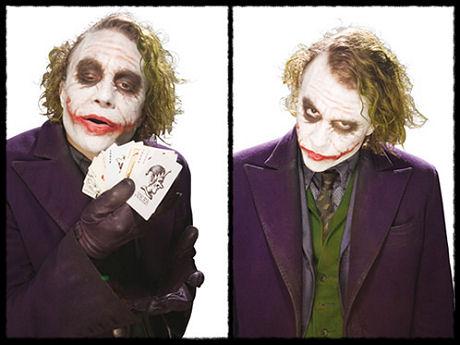 “I’m betting on The Ugly. Death is no way to get Oscars. Back in 1968 there was a furious campaign to prevent the recently deceased Spencer Tracy being nominated as best actor for Guess Who’s Coming To Dinner, on the sound basis that plenty of living actors deserved a break. Only in 1976 was this taboo finally overcome, with the recently deceased Peter Finch‘s victory for Network, but that was the 1970s, when everyone was crazy.
“So, The Ugly. Ledger went all Lon Chaney on his Joker. He worked out the makeup largely on his own, lathering himself up a Catweasel-style hair-catastrophe, and smearing his face with white powder to contrast with his two horribly healed, livid-scarlet cheek-slashes, which resemble what hangs out of the sides of a pastrami sandwich. For anyone who thinks Ledger got too involved in his role, bear in mind that Chaney — champion makeup man — actually pulled his eyeballs from their sockets with wires for his 1926 Phantom Of The Opera. He called it ‘extreme characterisation.’
“Ugly’s quite big this season. Hellboy endures snotty teenagers shouting, ‘Dude, you’re ugly!’ at him in his forthcoming sequel, and the Hulk ain’t no oil painting when his blood’s up. But Ugly isn’t bad for Oscars, or at least for nominations. The Elephant Man, Mask, Monster and The Hours (renowned babe to butt-fugly horror being a favored rite of passage in movie-star self-abasement trajectory) — all those harrowing sojourns in the Ugly Chair, all that falling out of the Ugly Tree and hitting every branch on the way down, it adds up in terms of prestige and awards.
“Beautiful Hollywood always loves an ugly loser. So maybe it’s Heath’s year after all.”
When was the last time that a villain performance was talked about so confidently and so early in the game as an all-but-certain Oscar nominee? Javier Bardem‘s Anton Chigurh in No Country for Old Men, of course. (My bad for spacing.) Before that, Anthony Hopkins in The Silence of the Lambs.