For me, Nanette Burstein‘s American Teen is too much of a hybrid to be called a “documentary.” It’s remarkably tight and clean and well-shaped. Almost too much so, it seems at times. Some of the dramatic “scenes” unfold so concisely and with such emotional clarity that it almost feels scripted. As if every so often Burstein had told the kids, “Cut! That was good…but once more with feeling.” That never happened, everyone says. Teen was just heavily covered and edited. 1,200 hours of footage were cut into a 100-minute film. But still… 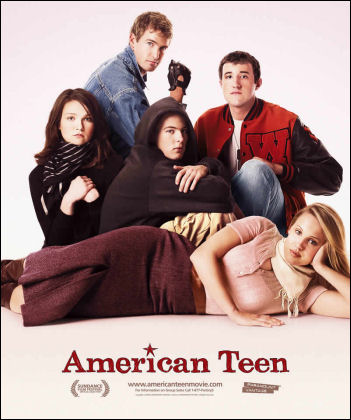 Teen is about five teenage seniors from Warsaw, Indiana — a basketball jock (Colin Clemens), a rich blond bitch (Megan Krizmanich), a plucky-sensitive X-factor musician girl (Hannah Bailey), a geek-nerd with serious acne who wears a 1965 Beatle haircut (Jake Tusing) and a hunky, nice-guy jock with a sensitive side (Mitch Reinholt). It follows them through their final school year — relationships, crises, family dramas, college plans. And it also takes us on a rewind tour of our own.
Sounds cliche-ish, right? Except American Teen breaks through all that by immersing us in all the essentials — conflicts, hidden goblins, insecurities — churning inside. And so you gradually forget about the slickness and start paying attention to the deep-down stuff.
I was kicked out of an American Teen screening during Sundance last January when I couldn’t find a seat. But I had seen the first ten minutes’ worth and didn’t like it much. Too glitzy, too familiar, same old stuff. So I didn’t feel too badly about having to leave. The trick is to get past those first ten minutes, because the movie does get better and deeper and more layered after that. 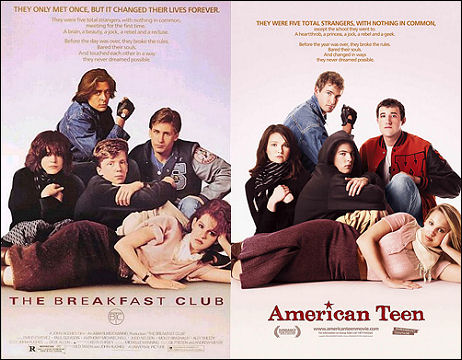 All high schools are composed of brutal societies with rigid caste systems. The result is that things are almost always awkward, difficult or at least unpleasant for anyone who marches to a slightly different drum. Only the jocks, the student-council dweebs and the pretty blondes seem to find any satisfaction or serenity. I was 85% miserable in my high school. I love it that many of the “stars” of my class are now kind of average, pudgy, diminished from what they seemed to be in their youth, pot-bellied, not up to very much. Hah!
Colin is the nice lanky basketball star with a John Kerry jawline who needs a scholarship to get into college. Hannah is an arty, free-spirited musician who wants to go to film school in one of the big cities. Megan is the dishy blonde with the haughty attitude who’s called “the biggest bitch” in school by Hannah. Jake is an acne-plagued geek who has no girlfirend, doesn’t run with a crowd and seems to have esteem issues. Mitch is a jocky fair-haired hunk with a sensitive side and a nice sense of humor.
They all go through tough times. Colin feels he has to be a superstar on the court in order to land that scholarship, which leads to the wrong on-court attitude and lots of inward perspiration. Dealing with a terrible family trauma and under much paternal pressure to get accepted by Notre Dame, Megan is shown to have inner anger issues, which are manifested early on in a stupid vandalism crime. Worried that she might inherit her mother’s manic-depressive chemistry, Hannah loses it after a longtime boyfriend dumps her, and then she gets dumped again after hooking up with nice-guy Mitch. And poor self-denying Jake gets dumped by his first girlfriend, although his luck turns down the road. 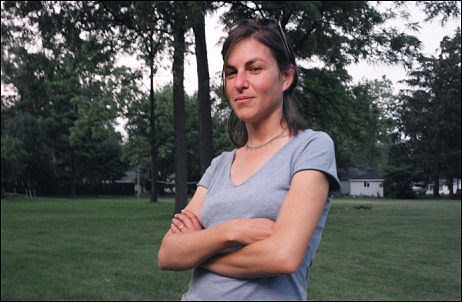 It’s all good dramatic stuff and definitely absorbing, although, as mentioned, there’s something about American Teen that just feels too polished. Despite assurances to the contrary, a suspicion lurks that portions of it may have been vaguely rigged on some level. Variety‘s Dennis Harvey mentioned a moment when “the camera catches two future sweethearts making eyes at each other in a crowded room, before they’ve even met.” And why isn’t anyone getting high? Everybody turns on in high school, right?
I liked, however, the animated sequences that dramatize the kids’ innermost fears and desires. This is a pretty good way of conveying how high-school kids really feel about their personal dramas. The sense of drama is very acute at that age. Teen is definitely worth catching this weekend. It’s worth catching, period. It’s a full-meal movie.
The student crowd I saw it with at USC last week were chuckling and “ah-hah”-ing from time to time. A couple of girls sitting near me gasped in shock when Hannah’s mother, who comes off as easily the least nurturing parent in the film, says to her “you’re not special” and does everything she can to talk her out of going to San Francisco in order to follow her dream. Hannah knows who she is and hates the idea of living a life of caution and limits in Indiana, and yet her mom can only talk about the risks and the pitfalls of the big scary world out there. All parents of creative people say this to their kids. Be practical, play it safe, have a back-up plan in case you fail. My parents said this to me. This is why I related to Hannah the most.