Hey, how come David Jones‘ Betrayal, a screen version of the renowned Harold Pinter play which came out 22 years ago and was then issued on VHS but never saw subsequent life on laser disc or as a DVD, is still sitting on the Fox Home Video shelf? 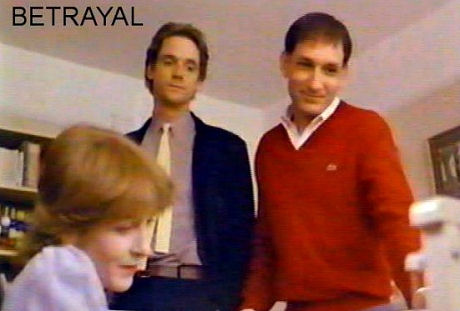 One indication of the completely buried status of Betrayal is that you can’t find any decent online stills from it. This awful shot looks like a screen capture from somebody’s TV screen as the grotesque VHS version was being played.

Ben Kingsley and Jeremy Irons‘ performances (as a cuckolded publisher husband and his best friend, a literary agent) ) are easily among their career best. The luncheon scene alone (“I mean, you love modern prose…probably gives you both a thrill!”) is worth the price alone. And the only way to see it, still, is to buy a cruddy VHS version on E-Bay.

I remember to this day going to the 20th Century Fox lot in ’83 to catch a screening of this. I had just arrived here from Manhattan and was still finding my feet. The screening was two or three weeks away from release and was quite the thing to see. I remember taking a friend, Kathryn Galan, and discussing it with her in the parking lot.

I’ve been badgering Fox Home Video about this title for a good eight to ten years, and all they’ve shown so far is a Ceaucescu-like silence and resistance to the idea.