Here‘s a 7.13 chat between Patti Smith and N.Y. Times reporter Deborah Solomon, the subject primarily being Steven Sebring‘s Patti Smith: Dream of Life, which I saw and fell for six months ago at the Sundance Film Festival. When will Los Angelenos get to see it? Or San Franciscans, for that matter? No clue. 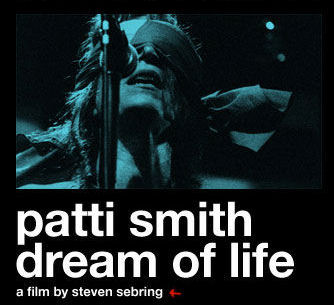 Palm Pictures is opening it at Manhattan’s Film Forum on August 6th. Some scattered openings will follow in September and October. San Diego, it appears, will have it before Los Angeles.
Six months ago I called it “an authentic spiritual adventure film — a mostly black-and-white exploration of Smith’s life, loves, history, poetry, music, alliances, relationships, etc. It feels at times like a companion piece to D.A. Pennebaker‘s Don’t Look Back (the monochrome classic about Bob Dylan touring England in the mid ’60s), at other times like a patchwork meditation, a home movie, a concert film, a fashion show. It’s about music, heroes, rants, chants, parents, deaths, declarations and determinations.
“For me, the authenticity is in the way Sebring has captured (or emulated) the grit and textures of Smith’s prose, and the fierce spiritual tension that her band music has always injected in one form or another. ‘Life is an adventure of our own design…a series of lucky and unlucky accidents,’ yes…but having a locomotive inside you helps. There is no boredom or lethargy in this lady’s life…not a lick of this. The movie is a pleasure, a journey, an attic sift-through, a huge charge.”