A reader remarked in response to yesterday’s Hitchcock/Truffaut item that Alfred Hitchcock looked like one of those recumbent tubbos from WALL*E, and I had to respond immediately to that. I’m re-posting here to give it the proper attention because it’s a fairly major point: 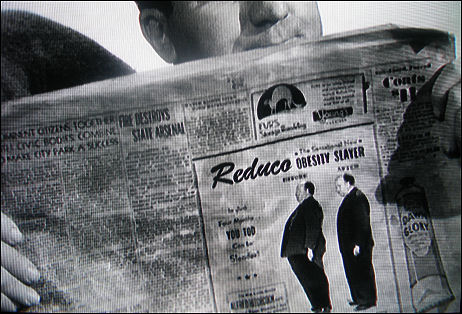 “No — he was Alfred Hitchcock, and therefore brought things to the table that were so creatively ripe, rich, eternal, fascinating and delectable that his physical proportions are anecdotal, at best. Same deal with Orson Welles (starting in the mid 1950s), Guillermo del Toro, Diego Rivera, Charles Laughton, etc. Their inside action so completely overwhelms the outside appearance that the matter of corpulence barely comes to mind.
“Now, it may well be that this or that morbidly obese Jabba waddling around the local galleria is a secret Orson Welles or Guillermo del Toro and that their inner light is simply not apparent to the passerby (i.e., I was a secret guy myself for years before coming into my own), but possessing an awareness of this or that lardbucket’s wondrous creativity, imagination and richness of spirit is not my responsibility. I need some sort of readily apparent indications of this.
“Besides, we can all tell things by just looking at someone. We can see past a person’s massive body-fat situation to look at how they’re dressed, what they seem to be income or lifestyle-wise, what they’re up to activity-wise, how fat their kids are and how their eyes look — how sparkling or interested they seem to be in the life around them, or how deadened by junk food and a WALL*E teletubby lifestyle, which creates eyes that are next door to a shark’s.
“On top of which Mr. Hitchcock was a super-Jabba only from the early to mid 1930s to the early ’40s. He embarked on a diet during the making of Lifeboat with the aid of a product called Reduco (you can see the before and after shots of Hitchcock on a newspaper that William Bendix is reading during the film), and henceforth was never that massive — just pleasingly plump or perhaps modestly fat. He suddenly became heavier, yes, towards the end of his life when he wasn’t working and was eating far too many rich desserts or high-calorie gourmet dishes, but….I digress. (I’m kidding about Reduco, of course — that was a made-up product Hitchcock threw in for the sake of visual economy.)”