I paid money to see Mamma Mia! at the Grove last night. As the Grove crowd skews younger, it was no surprise that management was showing this hideously spirited goofaholic musical in one of their smallest theatres (and The Dark Knight in four much larger houses). But what a surreal trip this thing is. I started to quietly flip out within minutes. The mood was appropriately “fun” and spritzy and all, but at the same time it felt like bad mescaline. I probably had an “uh-oh” look on my face. Fearful deer eyes, mouth half open. 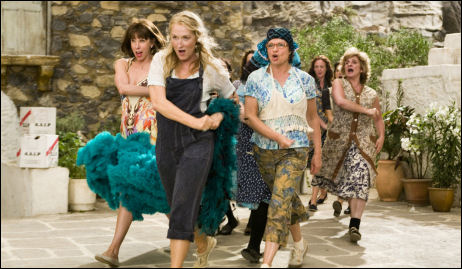 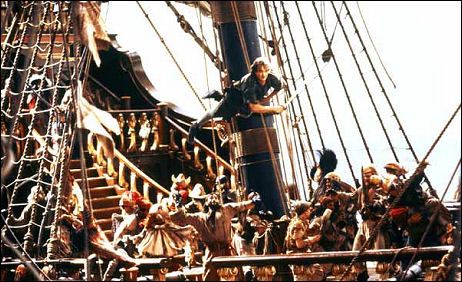 …that I first saw in Steven Spielberg’s Hook

I’m not talking about the bubbly girlie vibe that wears you down like a happy jackhammer. That’s just the director, Phyllida Lloyd, trying to give the film a unified emotional tone. I’m talking about the incompetent look and substandard craft of Mamma Mia!. Top to bottom, this sucker is poorly shot, poorly lit, poorly cut, poorly green-screened. It’s been made for the mostly female “easy lays” (ABBA fans, musical fans, those who’ve seen the stage show) who aren’t looking for much more than tunes and buoyancy and “hah-hah!”
Even if you know nothing about good filmmaking craft, a film that looks as weird as Mamma Mia! creates an “off” atmosphere that is difficult to describe. You have to sit through to really get it, I think. It would lead anyone to ask a series of Hamlet-like questions, I would think. As in “What is this? What’s wrong? Why do I feel so badly? Why does this movie look and feel flagrantly fake?”
The most bothersome thing for me was the fake sunshine lighting, necessitated by Lloyd and her dp, Haris Zambarloukos, deciding to shoot portions of the story, which is set on a small Greek island, on a sound stage at England’s Pinewood Studios.
I hated this indoor hot-sunwash effect when I first saw it 17 years ago in Steven Spielberg‘s Hook, which was shot by Dean Cundey. It looks precisely like what it is — an artificial simulation of sunlight that mandates a sense of profound unreality, and in so doing drives you half mad. 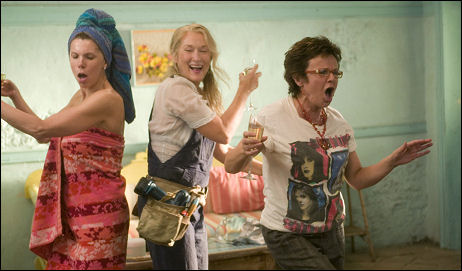 Otherwise I agree that Meryl Streep has given her worst performance ever in this thing. She overdoes the frenetic high spirits, rolling around and mugging and eyelash-batting and shooting her arms and feet out out at every turn. As N.Y. Times critic A.O. Scott said, “There is a degree of fascination in watching an Oscar-winning Yale School of Drama graduate mug and squirm, shimmy and shriek and generally fill every moment with antic, purposeless energy, as if she were hogging the spotlight in an eighth-grade musical.”
And yes, I still blame Osama bin Laden for this.
The crowd I saw it with was laughing, chuckling, into it, having a good old time. They laughed so loudly at times that I actually turned around and glared, partly confused (“what are you laughing at, for heaven’s sake?”) and partly annoyed. Mamma Mia! isn’t for people like me — I get that. I just don’t understand why someone in the chain of command didn’t say, “Why don’t we get someone who really knows from screen musicals to direct this thing?”