“Putting a violent spin on the Superbad formula (envelope-pushing raunch plus unexpectedly sweet affirmations of male friendship), Pineapple Express emerges as a fitfully funny, tonally trippy but not entirely satisfying effort from the Judd Apatow comic fraternity,” writes Variety‘s Justin Chang in a review that went up last night. Chang is obviously hedging, fence-straddling, not sold. Is this an omen of reactions to come, or is Chang just some fickle Variety guy off on his own beam? 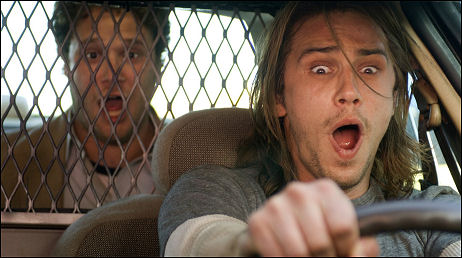 “Featuring Seth Rogen and a scene-stealing James Franco as two pot-addled losers on the run from a ruthless dealer, director David Gordon Green‘s first mainstream venture is an unruly, literally half-baked hybrid of bloody hijinks and stoner laughs.
“This is certainly one of the better-looking efforts to come off the Apatow assembly line, composed in crisp widescreen images by d.p. Tim Orr, whose poetic lensing in Green’s previous films helped earn the director comparisons to Terrence Malick. But production values are somewhat beside the point when the movie in question is more Harold & Kumar than Badlands.”
Interesting observation: “In addition to its many nasty instances of stabbing, shooting, groin-kicking and head-smashing, the pic offers perhaps the most graphic case of ear mutilation since Reservoir Dogs. [But] beyond that, neither the comedy nor the carnage warrant further Quentin Tarantino comparisons.
“Some choice lines aside, too much of the humor is predicated on the notion that watching others get high is inherently funny (unless the viewer happens to be in a similar state, it’s not). And while its genre-blurring may seem audacious by studio standards, in the end, Pineapple Express still feels too safe, too constrained by buddy-comedy uplift, to have any real bite. Ironically, the stakes seemed higher, the test of the central duo’s bond more wrenching, in the far less eventful Superbad.
“At the same time, the pic’s feel-good aura is undeniably part of its appeal, rooted in the chemistry of its two leads. As the more rational, stressed-out Dale, Rogen makes a perfectly panicky foil to Franco, who delivers a hugely likable turn as a genial bum who’s lonely at heart and loyal to the core. McBride also scores laughs as the corruptible but surprisingly resilient Red.”