Citing a decision by Disney/ABC to take At The Movies with Ebert & Roeper in a “new direction,” Chicago Sun-Times film critic Roger Ebert announced this morning that he’s bailing on the show altogether. This followed Richard Roeper‘s annnouncement yesterday that he’s also leaving because he and Disney/ABC couldn’t come to terms. 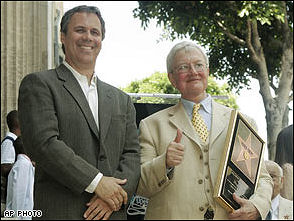 Reaction #1: who cares about Roeper in any light, medium or manifestation? His voice, I mean. The man could be kidnapped by aliens and taken to the planet Trafalmadore and the movie world as I know it would barely notice. Reaction #2: Ebert’s vitality and tenacity in the face of adversity is an inspiration to all of us, but surely it’s allowable to note that his vocal limitations are the key factor in his relationship with the show, and now whatever “new direction” it’s going in.