The decision by ABC/Disney honchos to hire E! Entertainment critic Ben Lyons and Turner Classic Movies host Ben Mankiewicz as the new Ebert & Roeper on a revamped At the Movies is one of those basic no-brainer moves that 50-something executives do when they don’t know what the hell else to do. A syndicated movie-review show starring two older guys (Roeper and Chicago Tribune critic Michael Phillips) isn’t attracting the under-35 demo? Solution: Replace them with two young bucks with TV experience, engaging personalities and the royal genes of an entertainment-establishment family. 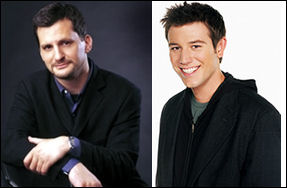 Lyons is the congenial, golf-playing, to-the-manor-born son of notorious easy-lay film critic Jeffrey Lyons, and the grandson of N.Y. Post columnist Leonard Lyons; Mankiewicz is the grandson of Citizen Kane screenwriter Herman Mankiewicz and the great-nephew of the legendary Joseph Mankiewicz, director-writer of All About Eve and A Letter to Three Wives.
If I watch the show, Mankiewicz is the guy I’ll have an easier time with. He seems low-key, thoughtful, sardonic. I would prefer if, actually, if the show featured Mankiewicz and his Young Turks partner Cenk Uygur. I love that guy — blowhardy, smart, take-it-or-leave-it.
I don’t like Lyons because you can tell right off the bat that he’s too much of a glider and a gladhander. Plus he went to school with Ivanka Trump. Plus he once called Nikki Blonsky his good buddy. Plus there’s something inauthentic about a supposed film maven who plays golf. Golf has its own spiritual kwan and undercurrent, of course, but 90% of the people who play it do so because they want to schmooze their way into power. Golf courses and clubhouses are havens for conservative-minded ex-fraternity guys who love wearing those awful pink and salmon-colored Tommy Hilfiger polo shirts and trading insider info with their pallies over mixed drinks after the game. You can’t serve golf and movies any more than you can serve God and Rome. They represent entirely different theologies.
I also wonder if the era of sitting passively in front of a TV screen and listening to a couple of guys trade opinions about movies has the same vitality that it had when Roger Ebert and Gene Siskel started Sneak Previews on PBS in 1977. It was a whole different world 31 years ago. Audiences these days like to talk back and argue and engage interactively. I’m not sure that a show that basically says “we’re the cool-ass GenY film critics with the famous dads and granddads, and you guys get to listen” is going to connect all that well.