Why am I the only one who seems to be enjoying the emotional catfights and verbal spitballing that’s been going on between MSNBC’s Keith Olberman, Chris Matthews, Joe Scarborough, etc.? For me, flying fur on a news channel is great entertainment and doesn’t happen enough. 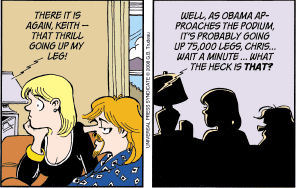 Tom Brokaw reportedly said that Olbermann and Matthews have “gone too far.” Wrong — that’s an older guy talking about the old days. Chris and Keith are right in tune with what’s going on in media culture. If you’re not some kind of advocate willing to put your cards on the table, you’re really not in the game. Exactitude and fairness are essential but true neutrality has never existed. Be who and what you are. Own up to it. No apologies.
Remember when newsmen used to play the role of the dispassionate pundit, trying to fit that classic avuncular Edward R. Murrow mold, intelligent thoughts expressed so carefully, striving to seem neutral but essentially conveying the spirit of conservative corporatism? That stuff doesn’t go now. We’re living in a talk-back, let-fly, tit-for-tat realm, and big media news guys aren’t Gods with a special access to the truth of things and the temperament to share it — they’re just smart beat reporters with good jobs and great sources. Not educators or pundits or ordained ministers as much as as intellectual fighter pilots in the catbird seat.
I see the mild acrimony between the MSNBC guys (which has hardly been constant — wer’e only talking about a few incidents) as livewire entertainment in the confessional, caustic, let-it-all-hang-out vein of Peter Finch‘s Howard Beale in Network. And it reflects the intensity and immediacy of today’s blogging culture — know what you’re talking about but let it out, don’t hold back, shoot from the hip. 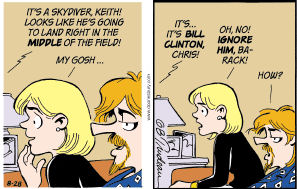 We all know that Fox News shills for the the reptilian ogres of the right and serves as the home base for creature-feature neocons…lizard tails, sulfur breath, flicking tongues, the “beast.” And we all recognize the need for balance. MSNBC delivers solid professional reporting and first-rate analysis but the commentary and the personalities, bless ’em, are what they are — “unfairly” slanted, aimed at smart, well-read lefties, and what of it? We need Bill O’Reilly and Sean Hannity antidotes.
I love the energy of MSNBC — it’s my place to hang and get riled up about the other side. It’s like sitting in on a lively political discussion at the family dinner table. I love Chuck Todd, Rachel Maddow, Pat Buchanan, the Newsweek commentators and everyone else who drops by, Mike Murphy included. Scarborough has the wrong attitude but he’s okay. I loved what he said in the wake fo Kerry’s defeat in ’04 about the youth vote “always leaving you at the altar.”
And yet I strongly dislike David Gregory — he constantly slips the negative into his Obama questions and commentary. He’s a shithead at heart. And I despise Tamron Hall, not that she matters in the greater scheme.