Early yesterday afternoon I sat down with Jordi Molla, a bearded, blue-eyed, remarkably serene Spanish actor who plays a Bolivian commander in Steven Soderbergh‘s Che. No one in Soderbergh’s four-hour-plus epic has any real “movie moments” — it’s a movie about being there and hanging with Che Guevara during the two most vivid dramatic chapters in his life — but he’s basically a bad guy who has a lot of Guevara’s men shot. 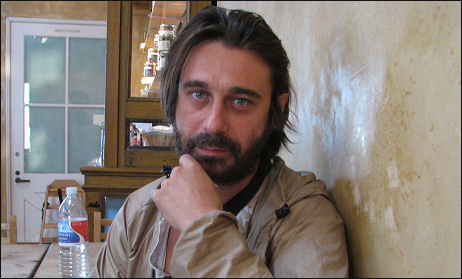 Molla still hasn’t seen Che, and won’t see until it premieres in Spain. Molla was shooting a film in Cannes during the festival and therefore could have seen Che when it showed at the Grand Palais, but the shooting days were long and demanding and he likes to get a good eight hours sleep when he’s working.
There was immediate comfort for me because of Molla’s European attitude — settled, moderate energy, not eager to project positiveness or buoyancy like most actors (but at the same time not sour or downish), okay with the flow of the tide, low-key, que sera sera. Due to his attitude or whatever, the L.A. vibe around us seemed to recede on some level, and I began to feel if I was sitting in an outdoor cafe in downtown Barcelona.
Molla was initially cast by Terence Malick four years ago to be in his Che film, which Malick had been looking to shoot for years although it eventually became Soderbergh’s after Malick fell out. Molla has been in tons of Spanish-produced films (including one for Pedro Almodovar) but his big appearances stateside have been in Blow, The Alamo and Elizabeth: The Golden Age. He’s been in the game since he costarred 16 years ago with Javier Bardem in Jamon Jamon.
I said something about having visited Cadaques, Spain, which isn’t too far from Barcelona, where he first studied acting. I think he said he’d visited there as a youth. If he didn’t say that then whatever, but Cadaques is a great little town either way.
Molla paints well enough to have had his work exhibited at Sotheby’s Gallery, Madrid (’07) and Galeria Carmen de la Guerra in Madrid. Molla has also directed two short films (Walter Peralta and No me importaria irme contigo) and written two books (Las primeras veces and Agua estancada).