Alaska Gov. Sarah Palin has a rural accent, wears horn rims, has a young child with Downs Syndrome and favors drilling for oil and gas. “We need oil, we’re hurting,and the pristine Alaskan wilderness can stand a little mucky-muck if we can increase our revenues” is what she’s basically saying in this Glenn Beck interview clip. Interviewed in early June, she’s also asked around the two-thirds mark about the possibility of being McCain’s running mate.

From her Wikipedia bio:
In 1984, Palin was first runner-up in the Miss Alaska beauty pageant after winning the Miss Wasilla contest earlier that year, winning a scholarship to help pay her way through college. In the Wasilla pageant, she played the flute and also won Miss Congeniality.
Details of Palin’s personal life have contributed to her political image. She hunts, eats moose burgers, ice fishes, rides snowmobiles, and owns a float plane. Palin holds a lifetime membership with the National Rifle Association. She admits that she used marijuana when it was legal in Alaska, but says that she did not like it.
Palin holds a bachelor’s degree in journalism from the University of Idaho where she also minored in politics. She briefly worked as a sports reporter for local Anchorage television stations while also working as a commercial fisherman with her husband, Todd, her high school sweetheart.
Outside the fishing season, Todd works for BP at an oil field on the North Slope and is a champion snowmobiler, winning the 2000-mile “Iron Dog” race four times. The two eloped shortly after Palin graduated college; when they learned they needed witnesses for the civil ceremony, they recruited two residents from the old-age home down the street.[3] Todd is a Native Yup’ik Eskimo. The Palin family lives in Wasilla, about 40 miles (64 km) north of Anchorage. 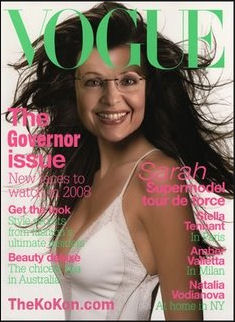 On September 11, 2007, the Palins’ son Track joined the Army. Eighteen years old at the time, he is the eldest of Palin’s five children. Track now serves in an infantry brigade and will be deployed to Iraq in September. She also has three daughters: Bristol, 17, Willow, 13, and Piper, 7.
On April 18, 2008, Palin gave birth to her second son, Trig Paxson Van Palin, who has Downs syndrome. She returned to the office three days after giving birth. Palin refused to let the results of prenatal genetic testing change her decision to have the baby. “I’m looking at him right now, and I see perfection,” Palin said. “Yeah, he has an extra chromosome. I keep thinking, in our world, what is normal and what is perfect?”
From the L.A. Times “Top of the Ticket” Andrew Malcolm on 8.1: “Questions have now arisen over whether Palin used her office to try and fire her ex -brother-in-law from a state trooper’s position. Palin asserts the charge is untrue, but the Alaska Senate this week approved the hiring of an independent investigator to look into the allegation.
“Our colleague Frank James over at the Swamp has more details on this governor we’re likely to hear more about in coming years.”