“In his entertaining book ‘Richistan,” Robert Frank of The Wall Street Journal declares that the rich aren’t just different from you and me — they live in a different, parallel country. But that country is divided into levels, and only the inhabitants of upper Richistan live like aristocrats. The inhabitants of middle Richistan lead ample but not gilded lives, and lower Richistanis live in McMansions, drive around in S.U.V.’s, and are likely to think of themselves as ‘affluent’ rather than rich. 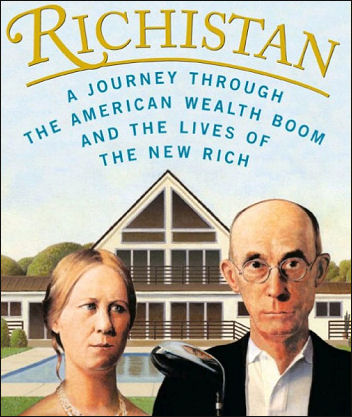 “Even these arguably not-rich, however, live in a different financial universe from that inhabited by ordinary members of the middle class: they have lots of disposable income after paying for the essentials, and they don’t lose sleep over expenses, like insurance co-pays and tuition bills, that can seem daunting to many working American families.
“Which brings us to the dispute about tax policy.
“[John] McCain wants to preserve almost all the Bush tax cuts, and add to them by cutting taxes on corporations. Mr. Obama wants to roll back the high-end Bush tax cuts — the cuts in tax rates on the top two income brackets and the cuts in tax rates on income from dividends and capital gains — and use some of that money to reduce taxes lower down the scale.
“According to estimates prepared by the nonpartisan Tax Policy Center, those Obama tax increases would fall overwhelmingly on people with incomes of more than $200,000 a year. Are such people rich? Well, maybe not: some of those Barack Obama proposes taxing are only denizens of lower Richistan, although the really big tax increases would fall on upper Richistan.
“But one thing’s for sure: Mr. Obama isn’t planning to raise taxes on the middle class, by any reasonable definition — even that of the Bush administration.” — from Paul Krugman‘s 8.22 column in the N.Y. Times, called “Now That’s Rich.”