The rule of thumb is that the best literary adaptations tend to be based on pulpy novels, or sometimes not even very good ones. (Mario Puzo‘s The Godfather being the paramount example of this.) The more formidable the reputation of the book that’s been made for the big screen, the greater the odds that the film will have problems of one kind or another. The motto, in short, is that it’s not the beauty of the prose but the strength of the bones that counts. 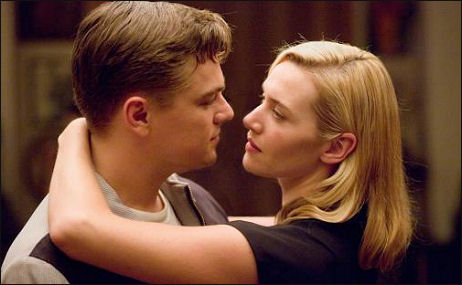 Truthfully or not, fairly or unfairly, that’s the general belief. And given this, it’s hard not to feel a little queasy about Sam Mendes‘ Revolutionary Road, the forthcoming Leonardo DiCaprio-Kate Winslet drama that’s based upon Richard Yates‘ hugely respected novel about suburban middle-class malaise in the 1950s.
The following words of praise for Yates’ book are what gave me pause about the film: (a) “A deft, ironic, beautiful novel that deserves to be a classic” — William Styron; (b) “The Great Gatsby of my time… one of the best books by a member of my generation” — Kurt Vonnegut; (c) “Here is more than fine writing; here is what, added to fine writing, makes a book come immediately, intensely and brilliantly alive. If more is needed to make a masterpiece in modern American fiction, I am sure I don’t know what it is” — Tennessee Williams.