The David Fincher tribute aside (which will include a short reel of scenes from The Curious Case of Benjamin Button), does this year’s Telluride Film Festival contain the most underwhelming, least exciting slate of all time? A Telluride fest without at least one oh-wow Oscar derby contender than no one’s yet seen is a stiff, and this one, the 35th, seems to have earned this distinction. 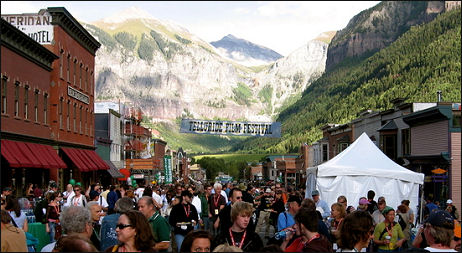 I can feel the flatline mood already and I’m sitting at a desk in West Hollywood, hundreds and hundreds of miles from this beautiful, peak-shrouded hamlet in Colorado’s Rocky Mountains.
What do we have besides the Fincher tribute? Mike Leigh‘s well-made but also (for me and many others) infuriating Happy-Go-Lucky, four well-respected Cannes entries — Bent Hamer‘s O’Horten, Matteo Garrone‘s Gomorrah, Ari Folman‘s Waltz With Bashir and Steve McQueen‘s Hunger — plus Tim Disney‘s American Violet with Alfre Woodard and Paul Schrader‘s Adam Resurrected, which some people are afraid of due to concerns it may play like a cousin of Jerry Lewis‘s The Day The Clown Cried.
Variety‘s Michael Jones has reported that “with limited slots over four days, the fest didn’t invite Jonathan Demme‘s Rachel Getting Married or Clint Eastwood‘s Changeling.” Does that make any sense to anyone? The absence of Demme’s film is a head-scratcher as it would have fit right in with this crowd. (I’ve seen it.) Jones also reports that Sam Mendes‘ Revolutionary Road, John Patrick Shanley‘s Doubt, Gus Van Sant‘s Milk and Oliver Stone‘s W weren’t finished.
“Last year was one of the strongest for American film,” co-director Tom Luddy has told Jones. “But this year I didn’t get any calls from Warner Independent, Picturehouse, Vantage. They’re gone.” Luddy also thinks the writers strike could have played a role in delaying projects.
The sneaks may include Danny Boyle‘s Slumdog Millionaire and Marc Abraham‘s Flash of Genius, which will both play Toronto.