N.Y. Times guy Michael Cieply has written a kind of handicap piece about the various films showing at the Toronto Film Festival — what they’re offering or looking for, their commercial potentials, etc. But Times editors always softball such pieces — they’ll allow implications of what’s doing but no blurting it out. So let’s give Cieply’s article the old shake, rattle and roll. 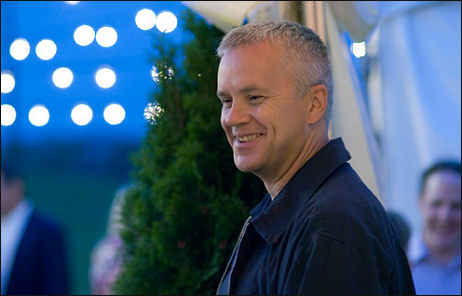 Tim Robbins in Neil Burger’s The Lucky Ones

Warner Bros. is “hoping” that Gavin O’Connor‘s Pride and Glory — a first-rate, fiercely acted drama about a conflicted cop family — “will generate excitement for a much-delayed Oct. 24 release.” Cieply doesn’t mention that less than three weeks ago WB honcho Alan Horn was also hoping to sell Pride and Glory, or was, at least, “open to offers.”
As I wrote yesterday, the people behind Steven Soderbergh‘s two-part Che have until today done an excellent job of convincing Toronto-covering journalists that they’ve all but thrown in the p.r. towel. I learned this morning that Canadian publicists GAT + M.LINK will be handing duties for the film in Toronto, so good for that. Cieply has written that “the producers of Che are finalizing a deal for United States distribution, their spokeswoman said.” Aaah, but this year? And if so, in time for the Oscar derby?
Charlie Kaufman‘s Synecdoche, New York didn’t find a distributor in Cannes because — get real — buyers knew ticket-buyers would run in the opposite direction of a movie whose title they can’t pronounce. At best, it’s an uphill commercial prospect. And yet it’s a high-end, smart-person’s drama that has some truly transcendent aspects (including a great sermon about the spiritual deflation of dealing with the 21st Century human condition).
Neil Burger‘s The Lucky Ones, about a trio of Iraq veterans on a bittersweet cross-country journey, is looking for festival support to build up interest in a 9.26 release by Lionsgate and Roadside Attractions. It’s a fine little road film (decent story, well acted) but even Burger wouldn’t claim that it’s trying to tap into serious groundwater or unleash ultra-passionate or disruptive currents in the American psyche. It’ll gather some positive reviews, but indie flicks of this sort — let’s face it — don’t tend to get a super-size bounce when they show at festivals. But it’s better to play at Toronto than not. 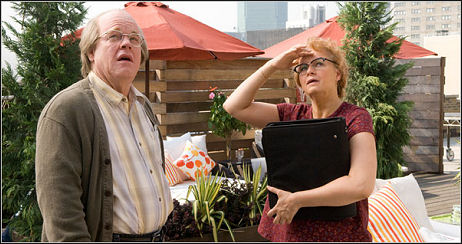 Darren Aronofsky‘s The Wrestler, currently without a distributor, and Jonathan Demme‘s Rachel Getting Married, a Sony Pictures Classics release, are described by Ciepley as “works by directors in peak form.” No comment yet on the Demme, which I’ve seen and agreed to not write about until next week, but I wrote before that I’m not looking forward to looking at Mickey Rourke‘s plastic-surgery-mangled face for 110 minutes or whatever in the Aronofsky.
Cieply notes “the kind of big studio releases — Michael Clayton, Walk the Line, Ray, etc. — that in the past used Toronto to start Oscar campaigns “are “in relatively short supply” this year.
And yet there are two films that “may fit the mold”in this respect, he writes — Marc Abraham‘s Flash of Genius, with Gregg Kinnear as a Tucker-like the inventor of the windshield wiper, and Spike Lee‘s Miracle at St. Anna, about a group of black soldiers in Italy during World War II. No offense, but I’m not detecting any “gotta see this” heat from these two at all. Which doesn’t mean things can’t change next week.
Joel and Ethan Coen‘s Burn After Reading got panned yesterday in Venice and is looking at a murky or at least uncertain Toronto reception as a result. The upside is that it has nowhere to go but up.
I have an issue with Fox Searchlight’s The Secret Life of Bees sight unseen due to the presence of Queen Latifah in a lead role. I made a blanket declaration last year about steering clear of all Queen Latifah movies for life unless something miraculous happens. Of course (and this is what I love about movies), that’s always a possibility..