The map on the Yahoo Political Dashboard has the most accessible state-by-state poll numbers, and I’m pleased, naturally, with the electoral vote projections favoring Obama over McCain, 278 to 227. But I’ve come to expect greater comfort and assurance from the guys at fivethirtyeight.com. They have Ohio and Virginia as lean Obama states, and an electoral vote projection of 329 to 208. Why the discrepancy? Split the two and Obama is projected to win just over 300 to McCain’s 217. 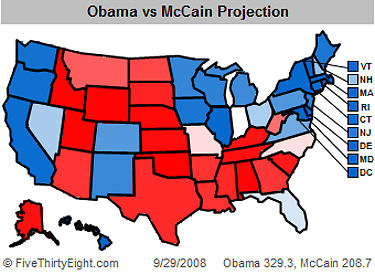 Another Jamie Stuart short about the New York Film Festival has been posted on the Filmmaker website. Per custom it hasn’t much to do with the Lincoln Center happenings. It’s another dry surreal thing. The term that comes to mind is “Bunuelian wackjob.” It contains a clip of Che director Steven Soderbergh defining what a political film is, but is mostly about strange noirish dreams in Stuart’s head. I watched it the first time with my amplified speaker system attached, and couldn’t hear most of the dialogue because of a bass guitar going “thwong, thwong, thwong, thwong.” And what does “this one’s for Matilda” mean?

“After I spent 2 1/2 hours laying on a stretcher, not being able to breathe, I thought to myself — what a waste. I’ve got a ton of money in the bank, I’ve got this hotshot job at DreamWorks and it’s all meaningless. I’ve just been living through my ego. From that minute, I promised myself that if I managed to survive, I’d live the life I wanted to live, not the way I thought other people wanted me to live.
“And however well I end up doing as a writer, whether I just eke out a living or win a bunch of awards someday, I’ll be happy because, to use the sports analogy, I’d feel like I left it on the field.” — Eagle Eye screenwriter Dan McDermott relating thoughts after almost dying from heart failure (caused by nitrogen poisoning from a scuba diving excursion), posted four days ago in Patrick Goldstein‘s “The Big Picture” bloggy-blog.

What can you say about a tough-minded, hard-nosed political drama that tells the truth, doesn’t mince words or pull punches, rekindles the viral excitement of a bygone era, offers several gripping performances and leaves you with a taste of ashes in your soul? 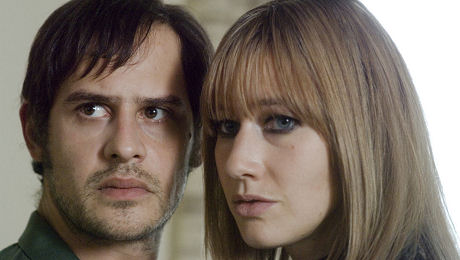 This is the reality of The Baader Meinhof Complex — Uli Edel‘s 149-minute drama about the famed German radical leftist group. I caught it last Friday night at the Aero along with L.A. Times guy Mark Olsen, The Envelope‘s Pete Hammond and two or three publicist pals who may be working on the film’s Academy campaign for Best Foreign Language Feature Oscar, as it was recently named as Germany’s official entry.
It’s a strong but bleak account of the impassioned but self-destructive insanity that took hold among radical lefties in the late ’60s and ’70s, and which manifested with a particular ferocity and flamboyance among the Baader-Meinhoffers. Edel’s chops are fine, the story is the story, what happened is what happened, but my God…what do you do with a history of this sort? And where in this saga is a semblance of a common cultural current? It’s not as if a willingness to kill or be killed for one’s political beliefs is something that comes up these days on Sunday mornings at Starbucks after you’ve had your morning run.
Maybe more of us should think and act in terms of life-or-death commitments. Maybe we’d be better off if more of us had the cojones to stand up and fight evil in a way that gives no quarter. But the film mainly sinks in as a revisiting of a time in which a small but dead-serious sector of the left-liberal community temporarily lost its bearings and in some cases jumped off a cliff in order to stop what they saw as a form of absolute establishment evil. 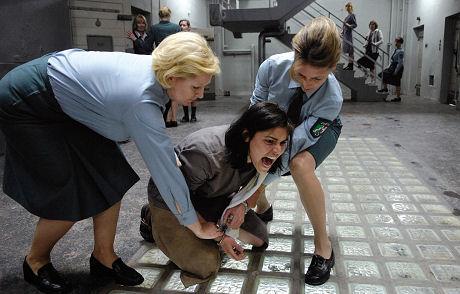 The Baader -Meinhof gang may have have had their hearts (if not their heads) in the “right” place, but what are you supposed to do with their example in the age of Barack Obama, financial meltdown, global warming, the SUV pestilence, middle-class obesity, the cultural tumor that is Beverly Hills Chihuahua and rampant plasticity and vapidity in almost every corner of the globe (especially among younger women who sit in groups of four or five in bars and cafes and laugh loudly, squealing like little piglets)?
I’m glad I saw it, I’m glad it was made, I respect and admire the contributions of everyone on the team (Edel, producer-co-writer Bernd Eichinger, exec producer Martin Moszkovicz and cast members Martina Gedeck, Moritz Bleibtreu, Johanna Wokalek, Bruno Ganz, Nadja Uhl, Jan Josef Liefers, Stipe Erceg, Niels Bruno Schmidt, Vinzenz Kiefer, Alexandra Maria Lara), and I’m glad it’s doing well commercially in Germany and elsewhere.
But I don’t think it has a prayer in hell of being nominated for Best Foreign-Language Feature. Not because it’s a bad film but because it leaves you shell-shocked and saying “what the fuck?” And because of that feeling of ashes. And because the blue-hairs are going to come out of screenings of this thing going “good Lord!”
I’m sorry to say this, but The Baader Meinhof Complex is a gripping but awfully strange and even weird story about some very extreme, go-for-broke people who didn’t know when (or how) to chill out and seemed, in the final analysis, to be more than a little in love with death. Call me a political dilletante, but as much as I admire the nerve of people willing to risk death for their political beliefs I want to live and share love and spread the word about good movies and play with my cats until I’m 97 years old. 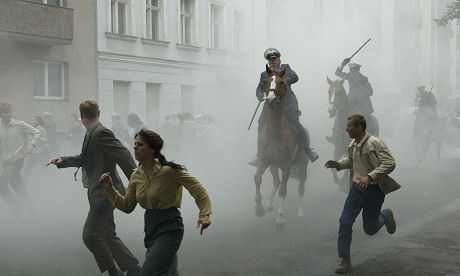 Here‘s Mark Olsen’s reaction, which appeared yesterday in Patrick Goldstein‘s bloggy-blog “Big Picture” column (as opposed to the online remnant of the weekly print column). And here’s Boyd Van Hoeij‘s Variety review, posted on 9.25.
When and if this worthy film obtains U.S. distribution, it should be called The Baader Meinhof Gang and let it go at that. You have to think in popcorn terms when you’re thinking up a title, and popcorn munchers don’t know from complexes. This is basically a high-voltage shoot ’em up about a political-minded Barrow gang that ends in jail and suicide.

In the remarkable, deeply penetrating I’ve Loved You So Long (Sony Classics, 10.24) , Kristin Scott Thomas gives an immensely sad but highly sensitive and attuned performance that you just know, minutes into it, will be with you the rest of your life. She draws you in like some sad-eyed lady of the lowlands, but she never sells anything. Start to finish, she dwells in this fascinating zen-grief space that just “is.” She owns it…and from the moment the film begins, owns you.

Warning to first-time viewers: Watch this YouTube trailer, obviously, but don’t go to the Apple page which (a) offers it in various sizes and formats but (b) offers an absurdly over-explicit spoiler synopsis that can only serve to diminish intrigue and/or interest.