Update: An apparent policy not to screen Ed Harris‘s Appaloosa (New Line/WB, 10.3) for critics in local markets is being corrected. I reported this morning that screenings hadn’t been scheduled in Portland and Arizona, but I’ve since been told by the Arizona Daily Star‘s Phil Villarreal that a press screening was suddenly set up today, after my earlier story ran. 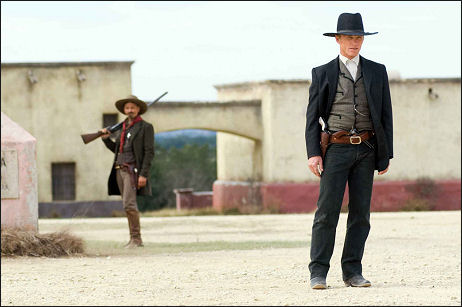 Las Vegas Review Journal critic Carol Cling also told me that it’s being press-screened for her territory; same message from Dan Lybarger in the Kansas City area. So either things weren’t as bad as suspected or local WB reps are now getting things in gear.
Villareal and the Oregonian’s Shawn Levy told me this morning that Appaloosa is not being screened for them. I asked Appaloosa’s exec producer Michael London what the story was, and he didn’t get back.
The early reports seemed to argue with an upbeat 9.19 Conde Nast Portfolio column by Fred Schruers, called “New Life for a New Line Movie,” that says Warner Bros. seems to be getting squarely behind the film.
Schruers first explains how there was initial trepidation on the part of Harris and London that Warner Bros. might not fully support Appaloosa, a New Line production that became part of the WB release calendar when New Line company was folded into WB behemoth.
Schruers writes that “in his first meeting with the Warner Bros. marketing executives after the merger, Harris recalled that the outlook for his sober Western was decidedly downbeat. ‘I was getting the feeling they were going to throw it the dogs, or straight to DVD,’ Harris said.”
“We naturally had a lot of trepidation” after Warner Bros. absorbed New Line, London is quoted as saying. “But once the studio began really working on the movie, they started getting excited about their marketing materials. They got a great trailer out there. 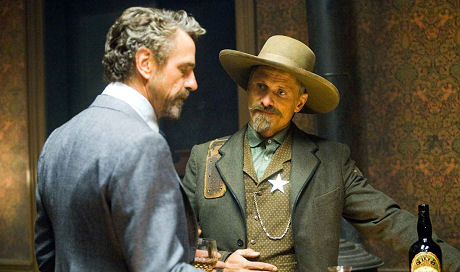 “Now, after the Toronto [Film Festival showings], Warners seems genuinely invested in the movie succeeding,” London states.
No screenings in Portland or Tuscon doesn’t sound like genuine investment to me. I can understand crappy programmers not being screened, but Appaloosa is a better-than-passable tweener. I wasn’t over the moon about it, but it’s certainly not a burn. It grabbed me for the most part, and at no point did it irritate or piss me off — a significant thing from my perspective. It’s not half bad. Engrossing, interesting, handsomely shot, character-driven.
“It’s a tiny bit better than James Mangold‘s 3:10 to Yuma,” I wrote in Toronto. “It’s got a nice modest feel to it. And it’s nicely shot, very well acted (particularly by Harris, Viggo Mortensen and bad-guy Jeremy Irons) and ‘engaging’ as far as it goes.”
And a fair number of journos who saw it in Toronto posted admiring reviews. N.Y. Post critic Lou Lumenick called it “the best Western since Open Range [that] shows there’s still life in this most unfashionable of genres.” Time‘s Richard Corliss wrote that “in its fidelity to western verities, Appaloosa may seem radical to today’s viewers. At a time when images in all visual media bombard the brain, the western — the one original American film form — moves at the pensive pace of a European art film.” 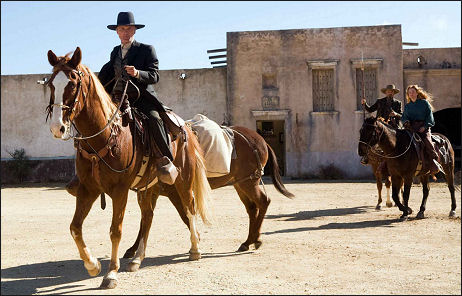 Here’s Levy’s account: “Before Toronto, the local rep” — the Seattle-based Terry Hines & Associates — “contacted us wanting to know if we’re interested in speaking to Ed Harris about Appaloosa. We said sure, show us the movie, and they said okay, we’ll set something up. The deadline came and went. Then the picture got onto the release schedule, and the other day — this is a movie that’s coming right up, opening on 10.3 — and they said, ‘Oh, it’s not being screened in Portland.'”
Villarreal said the local WB/New Line rep has told him “nothing [is] planned right now” as far as showing Appaloosa to Arizona critics.
“Almost every week something is not being screened for the press up here,” says Levy. “Or they show it at the very last minute. You can’t see it, you can’t see it, you can’t see it…oh, you can!
“30 to 40 films per year don’t get screened in Portland,” Levy says. “I would say three to four each month. That’s thirty or forty per year — 10% of their annual product — that they don’t want to show people. And Appaloosa has about a 58 rating on Metacritic….it’s not shit.”
Here’s another, somewhat unsual take, conveyed in a couple of excerpts from A.O. Scott‘s review in the N.Y. Times: “It’s not a great western, and, as I’ve suggested, it doesn’t really try to be. This one shows a square jaw and a steely gaze, but also a smile and a wink. There is no shortage of killing — it’s a large part of how Virgil Cole, Mr. Harris’s character, makes his living — but Appaloosa works best as a cunning, understated sex comedy.”