Jonathan Demme‘s Rachel Getting Married (Sony Classics, 10.3) “is endlessly sociable, with people crowding the camera as if in a documentary, yet sometimes you want that camera to draw back and watch them from a distance — to see how they mill around in the frame rather than shifting the frame itself. 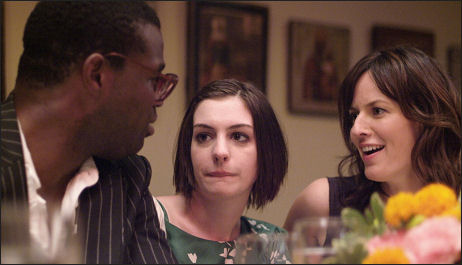 “The wedding party is the ultimate guide to Demme’s benign vision: the groom is black, the bride is white, she and her bridesmaids are dressed in saris, nobody so much as mentions race, and the officiating priest is played by Demme’s cousin, Father Robert Castle, about whom he made a fine film, Cousin Bobby, in 1992. I
“I don’t know if there were any Republican voters involved in this movie, but, if so, it must have been a lonely time. Just imagine if the rest of the crew found out. They would pin you down and sing to you until you changed your mind.” — from Anthony Lane‘s review in the current New Yorker, dated 10.6.08.