If low-information Walmart moms were inclined to read or even consider what’s reported in the N.Y. Times, they might be thinking twice right now about supporting Sarah Palin‘s vice-presidential candidacy. But of course, if they did read news stories of this sort they would no longer deserve the sobriquet. 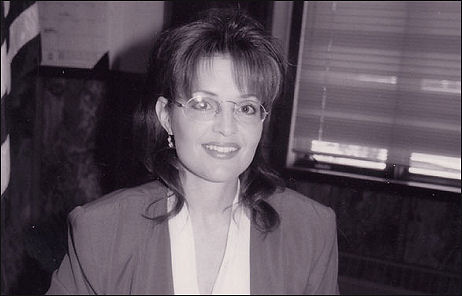 This 9.13 expose about Palin’s past political maneuvers in Alaska, written by Times reporters Jo Becker, Peter S. Goodman and Michael Powell, is rough stuff. Based on information from by 60 Alaskan governmental sources, it portrays a woman who has “pursued vendettas, fired officials who crossed her and blurred the line between government and personal grievance.”
Sarah Palin “walks the national stage as a small-town foe of ‘good old boy’ politics and a champion of ethics reform,” the story reads early on. “The charismatic 44-year-old governor draws enthusiastic audiences and high approval ratings. And as the Republican vice-presidential nominee, she points to her management experience while deriding her Democratic rivals, Senators Barack Obama and Joseph R. Biden Jr, as speechmakers who never have run anything.
“But an examination of her swift rise and record as mayor of Wasilla and then governor finds that her visceral style and penchant for attacking critics — she sometimes calls local opponents ‘haters’ — contrasts with her carefully crafted public image.
“Throughout her political career, she has pursued vendettas, fired officials who crossed her and sometimes blurred the line between government and personal grievance, according to a review of public records and interviews with 60 Republican and Democratic legislators and local officials.”
As a 9.12 N.Y. Times editorial reads, “If [John McCain] seriously thought this first-term governor — with less than two years in office — was qualified to be president, if necessary, at such a dangerous time, it raises profound questions about his judgment.
“If the choice was, as we suspect, a tactical move, then it was shockingly irresponsible.”