Boyle in the Lobby

It took a few hours, but I finally uploaded yesterday morning’s interview with Slumdog Millionaire director Danny Boyle. Or rather the computer did it while I slept. It’ll probably take a while to load. I’ll have to remember next time to break the video down into five- or ten-minute segments. I haven’t timed the Boyle chat but it’s something like 25 or 30 minutes. 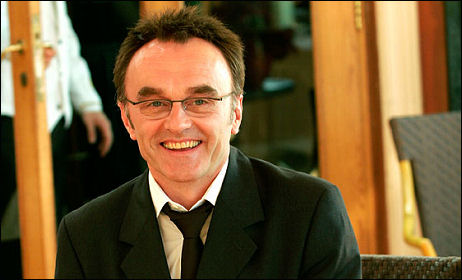 I still can’t figure what code to use so a visual screen will show up on the column that you just click on to activate, like all the other video-running sites do.
Boyle said a couple of times during our discussion that he believes in “extreme” and “vivacious” cinema. Slumdog Millionaire is certainly that. It’s also very much a rags-to-riches Dickensian fable in which all manner of ugliness, cruelty and avarice are heaped upon the young hero, and things are set right only within the last half-hour.
This means, naturally, that Slumdog, though beautifully filmed and sharply written by Simon Beaufoy (having adapted an Indian book called Q and A), is not exactly surging with alpha vibes during its first two-thirds. But it’s certainly propelled by Boyle’s remarkable filmmaking fever, and it does start to pay off like a slot machine starting around the 100-minute mark. And then it concludes with a dance sequence in a Mumbai train station that just blows you away.
It’s a epic-sized, live-wire story of an Indian youth named Jamal (the grown-up version is played by Dev Patel) whose streak of correct answers on a Hindi version of Who Wants to be A Millionaire? creates suspicion that he’s somehow cheating. The powers-that-be interrogate him, and his life story — which, in a sense, is also the story of India’s social evolution over the past 15 to 20 years — is told to them and to us.
Slumdog looks like Best Picture material to me because of its freshness (all the more interesting by its reliance on a story-telling strategy made famous by Charles Dickens), the themes of justice and redemption and satisfied love, the almost luridly colorful vistas, and the relentless and impassioned character of Jamal, who is every kid who ever had to run and hustle and struggle to survive.